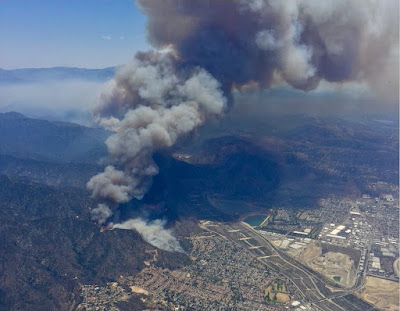 Monday morning, June 20, a huge plume of smoke began to billow into the sky above Duarte and Azusa. By day’s end, the fast-moving wildfire consumed nearly 3,400 acres of Fish and Van Tassel canyons all the way to Fish Canyon Falls, Mount Bliss, and beyond. I was staying in L.A. for four days of meetings and began to see pictures of the inferno pop up on my smart phone. Heart wrenching! But with the consuming demands of my job that week, I had hardly a moment to think about the fire or look at the news. 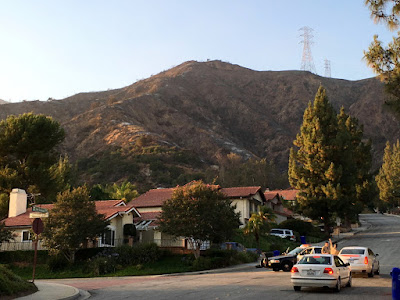 When I got home on Thursday evening, June 23 and saw the mountains and began to see the fire reports and news stories, I was numb. At about 7 p.m. I drove over to nearby Duarte to see what I could see. Encanto Parkway was blocked off so I meandered through the residential streets a little further west and north, but sheriff deputies had the streets near the mountainside closed off. I headed east on Royal Oaks then north on Melcanyon Road and arrived at the intersection of Brookridge at the base of the mountainside. The burn area loomed above me. I was surprised that there were no deputies or signs restricting access.

So I got out of my car and began to walk north up the access drive adjacent to Opal Canyon Road. The driveway leads to a water tank and an access trail to Van Tassel Fire Road. The charred scene was heartbreaking. At the water tank I transitioned to the path and began walking through what days earlier was thick, mature chaparral. Acrid smell filled the air. There was nothing but ash and blackened sticks. It was a strange and eerie scene. I was too numb to cry. I had no intent to hike that evening, and as I climbed the ashy path I had no idea how far I’d go. But curiosity drew me upward. I was snapping pictures but was mindful of a low battery. When I reached Van Tassel Fire Road I decided to continue climbing. Occasionally a firefighting helicopter flew overhead. I was surrounded by lifeless moonscape. I monitored the time and daylight because I didn’t want to be coming down in the dark. At 8:21 I reached a hairpin curve with good views south and decided this would be my turn around point. I retraced my steps down the road as dusk turned to night. Ambient light was sufficient as I carefully negotiated my way down the access trail and arrived back at the car at 9:00. I knew I needed to return soon.

A week later, on Thursday evening, June 30, I decided an after-work hike up Van Tassel Fire Road would be good. This time I would be more equipped to hike. I took the 10-minute drive to the Vulcan entrance on Fish Canyon Road to see the new banner they posted on Wednesday announcing that Fish Canyon Trail is temporarily closed. Then I drove over to the stables at the head of Van Tassel Fire Road. There were no closure notices so I was free to walk up the road. 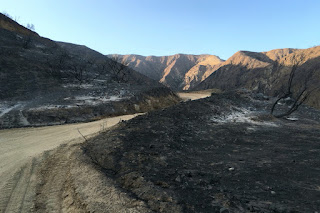 6:48 PM - Begin hike. The sun still rests on the Van Tassel Ridge high above me on the west. It’s amazing that the equestrian center was spared in the mouth of the canyon with scoured earth on three sides. I walk up the steep road surrounded by blackened scenery. The smell of burnt vegetation is still strong. I look north up narrow Van Tassel Canyon and ponder the possibility of exploring it now that it’s vegetation free. Soon the east end of the San Gabriel Valley lies before me illuminated by the late-day sun.

The barren, ashy landscape is surreal. There is almost a beauty to it in a Tim Burton kind of way. The only life is a fresh anthill. 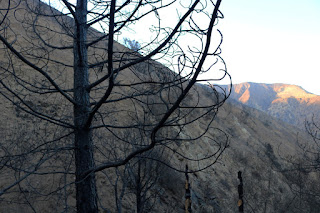 The road has had a lot of traffic since I was here a week ago…no doubt firefighting vehicles. There is a fresh set of small tennis shoe prints. I leave a trail of footprints in the soft dirt. Higher and higher I climb surrounded by moonscape with blackened sticks.

A lone blossom stalk of a yucca juts into the sky, strangely untouched by the fire.

As I round the outward bend by the first water tank, the pinkish-red Phos-Chek fire retardant covers the ground. Tons of it was dropped by aircraft during the first day of the fire.

The top of the water tank is now Phos-Chek red.

Typically much of my attention while hiking is on the plant life and photographing flowers. It’s so bizarre to walk through a lifeless moonscape. The last of the day’s sun lingers on distant Mount Baldy and neighboring peaks to the east. Huge power towers stand gangly against the azure sky. 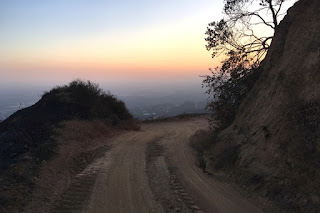 7:43 - Heading west I pass through the open vehicle gate (it’s usually locked). I’m hoping to get line-of-sight to the 8:08 sunset, but soon see that the sun has dipped behind Mount Harvard. The line of Phos-Chek around me didn’t keep the fire from consuming the foothills to my west. The road cuts back east and I continue up. Dusk settles over my view east and the blackened landscape.

The scene is haunting. I should be overwhelmed with sadness over the loss of the rich chaparral that blanketed these slopes. But I feel at peace…kind of a melancholy contentment. 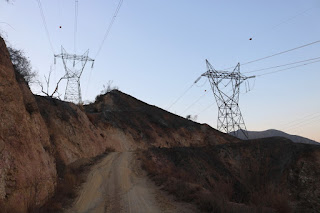 For my destination I had in mind going to at least the power tower retaining wall up ahead. Since I was here last in August 2011, Edison has been working on the towers. I had assumed they were building additional ones, but I don’t see any new ones. I reflect on the many times I’ve climbed this road. It’s so familiar, yet now so different.

7:57 - Power towers, but there is no more retaining wall.

The last sunlight sits upon Mount Baldy. I decide to continue up a little more. Deep in the canyons below some trees may have survived the inferno. I pass through a section of road that was previously lined with beautiful pines.

They are dead now. 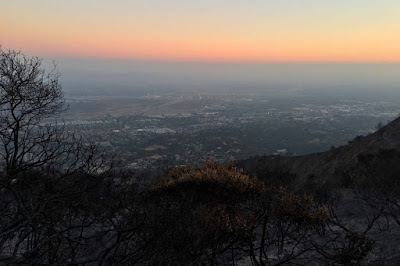 I now have a view southwest over the San Gabriel Valley as dusk falls and lights begin to twinkle. An orange band of haze outlines the horizon. It’s peaceful here. I linger for a few minutes and soak in the beauty of nightfall. At 8:15 I head down.

I’m tempted to tangent up a slope to achieve a summit, but I decide to not trample bare earth by going off trail. As I reach the power towers, I scramble up to the tower on the high point to enjoy the vistas. It’s almost dark now and the human sprawl is a blanket of lights. The ambient light is sufficient for my steps. The temperature is quite pleasant. 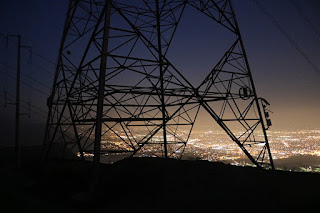 8:58 - Pass through the open vehicle gate. The power towers have a strange beauty to them. I text a photo to my wife letting her know where I am. The dampness of evening intensifies the smell of charred landscape. I finally get out a light at 9:10 to aid my steps and at 9:15 I reach the bend where I ended my walk last week. It’s peaceful here. Occasionally the stillness is broken by rocks tumbling down the bare slopes. Crickets are chirping in the canyon below…the sounds of life amidst scoured earth. The bray of horses signals that I’m nearing the end. A tarantula crosses the road.

Epilog - What an interesting and fulfilling hike. Sad, serene, stirring, surreal. It’s sobering to experience the devastating results of a ferocious inferno. More than 4,200 acres of scorched earth. I’ve hiked this road many times since it is one of my nearby scrappy hikes. So sad to see it gone. The 2014 Colby Fire incinerated more than 1,700 acres of mountainside above Glendora and Azusa, laying waste the scenery around Colby Trail and Garcia Trail (which is still closed). Now the Fish Fire has destroyed the hikes to nearby Fish Canyon Falls and Mount Bliss. My four favorite scrappy hikes…reduced to moonscape. But I shall continue to hike and find beauty wherever I tread.