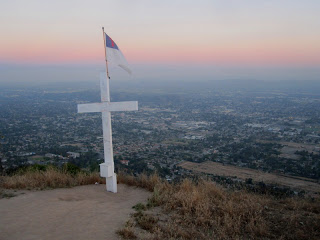 It’s summertime! Summer 2011 official began in Southern California at 5:20 p.m., June 21. It was a pressing two days for me at work, so I decided it would be great to begin summer with a hike. I got home from work at about 6:30 and by 7:00 I was on my bike heading for nearby Garcia Trail...my default scrappy hike. 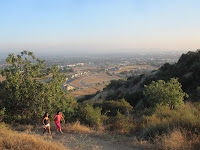 7:22 - Begin hike. The weather is warm and the sun low in the sky. With the sun setting at 8:05, I’m hoping to get a good sunset picture. But I see the sun will be setting behind the mountains stretching to the west and be out of sight long before 8:05, so I’ll have to get the shot from the trail. There is a real beauty this time of day. I’m not paying much attention to plants but some of the blooms include buckwheat, golden yarrow, scarlet penstemon, cliff aster, sunflower, mustard, everlasting, yucca, deerweed, Douglas nightshade, clarkia, fountain grass, tree tobacco, elderberry, and lupine (one occurrence on the summit). 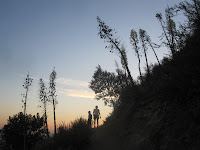 There are lots people on the trail; the majority are young adults. My pace is brisk and I’m working up a nice sweat. The June gloom of this morning has left moisture in the atmosphere creating a distant haze. I am perturbed about the amount of litter along the trail...what is wrong with these people?!

7:29 - Arrive into direct sun at the ridge divide past the concrete wall. The sun is starting to dip behind the mountain so I figure this will be my sunset shot. Take a few pics and continue. Various ones stop to look at a tarantula crossing the trail. The beauty of dusk compels me to continue capturing the azure sky. The trail maintenance efforts of the crew from county fire camp 16 on May 9 has made considerable improvement on the trail. 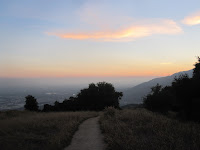 8:05 - Arrive at Azusa Peak, exactly at sunset, but the sun has long dipped behind the mountains. The Christian flag atop of the large white cross flutters in the breeze. Others arrive at the summit. A new peak register box has been attached to the base of the cross. Looks like it is custom made and quite durable. The human sprawl rests in twilight below. I don’t linger long, wanting to be off the trail before it’s too dark. Leave summit at 8:12. Others are still coming up the trail. 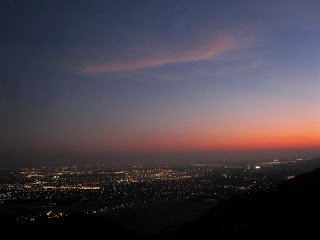 I enjoy the beauty of dusk and am still drawn to photograph the sky. A blanket of city lights begins to twinkle, but I know my efforts to photograph the panorama will be blurry without taking time to secure the camera. The cool evening air feels good. Crickets chirping. My steps are more guarded as the light dims.

8:48 - Finish hike. It’s dark now and starting to cool. I’m glad my bike is still locked up to the picnic table. I enjoy the bike ride home, which is mostly downhill!

Tips for Hiking with Children 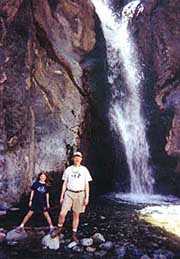 The question was from a father who had just purchased an annual Adventure Pass to take his two boys (ages 5 and 3) for leisurely, scenic, mild strolls and would greatly appreciate any advice I may have about children-friendly trails. Here was my response, with a few enhancements:

Great question! Thanks for asking. I commend you for wanting to get your boys into the outdoors. That’s a great place to create wonderful experiences.

One of the key issues with children is attention span. A child generally has an attention span of one minute for every year of age. For example, your five-year old can be engaged in an activity for about five minutes before he is ready to move on. 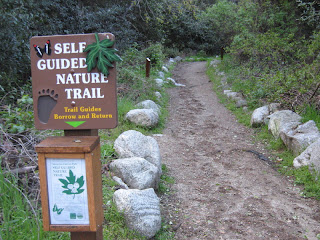 So even if the outing lasts an hour, you’ll find you can keep the boys engaged by breaking it up into smaller pieces. Walk a few minutes, watch a butterfly, examine a plant, walk some more, talk about lizards, walk, sing a song (not too loudly), tell a story, look at tadpoles, walk, count the rings of a tree stump, etc. My wife, who was a preschool teacher for years, always says, “Keep them wanting, not waiting.” In other words, conclude the outing before they are done so they will want to come back for more. If they are done before the outing is, they may not want to come back.

Now for some specific outings. Generally kids are more inclined to enjoy creek-side strolls rather than climbs to mountain peaks. Some good places in the front range of our San Gabriels include:

See Dan's Hiking Pages for descriptions of these hikes.

Even trails like Icehouse Canyon, which is a trail serious hikers use in trekking deep into the wilderness, can be great for kids if you just wander up the trial for a mile or so. There are lots of spots along the creek for exploring. Up toward Mt. Baldy, San Antonio Falls would be doable and offer a big waterfall experience. Always be vigilant for safety around water, especially swift moving rivers and streams. 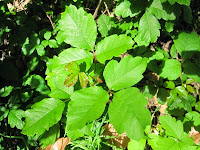 Another thing to keep in mind is that there is a lot of poison oak in the foothill canyons, so learn to recognize it and be alert in keeping your kids out of it. I taught my kids to avoid petting dogs on the trail because a dog can easily get the poison oil on its fur and it can transfer to a hand, then to the face...then the kids are horribly miserable for couple weeks.

It’s not permitted to pick flowers or collect natural material from the National Forest or from most parks and recreational areas, so teach your kids to look and enjoy, and take only pictures. And of course, we always want to pack out our own litter, even fruit peals. 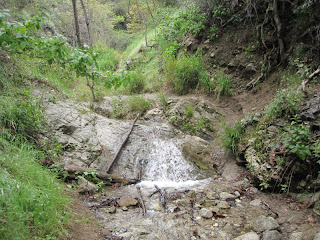 Make sure your kids are wearing appropriate shoes and clothing for the outing and think in layers to be ready for changing temperatures. Carry plenty of healthy snacks and water with you and always have a first aid kit for any cuts or scrapes that might occur. And wet wipes are always handy to have along. Mosquitoes and other bugs love streamside settings, so carry some repellant in your bag. And don’t forget the sun screen.

Helping your children gain a love and appreciation for nature is a wonderful gift that will last a lifetime. And you’ll have some great times along the way!

Do you have other tips for hiking with Children? Feel free to share your comments below.

Other Pages on Dan’s Hiking Pages:

Plants and Wildflowers in the San Gabriel Mountains

Animals of the San Gabriels

Waterfalls of the San Gabriels 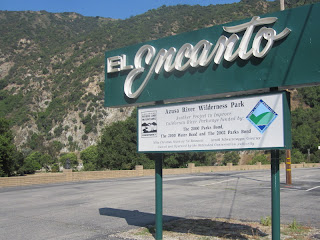 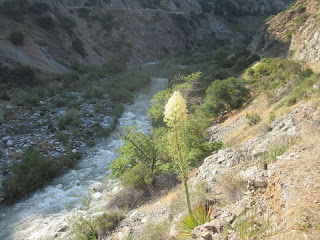 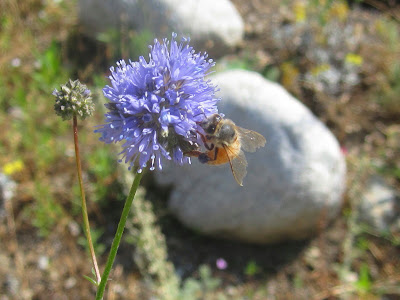 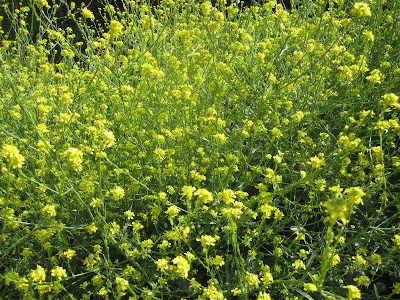 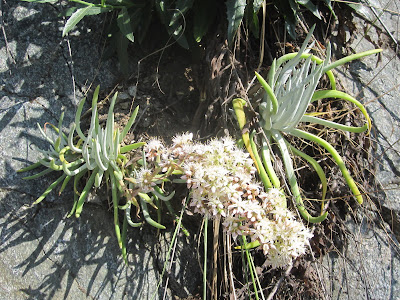 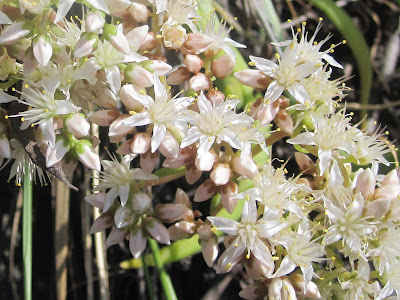 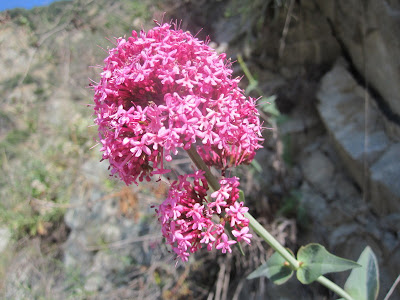 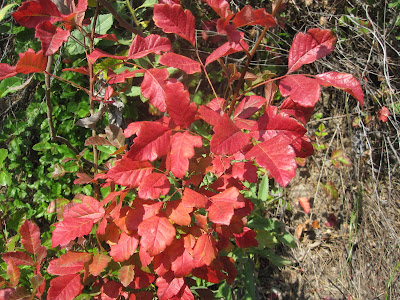 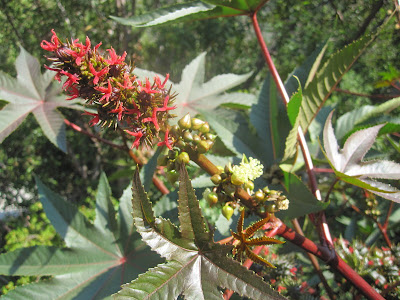 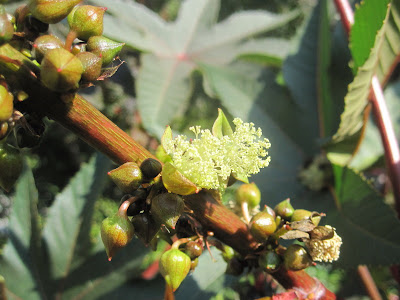 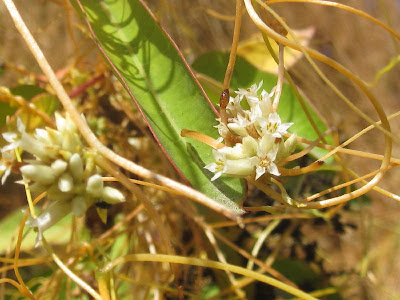 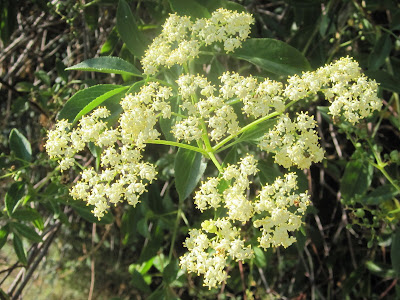 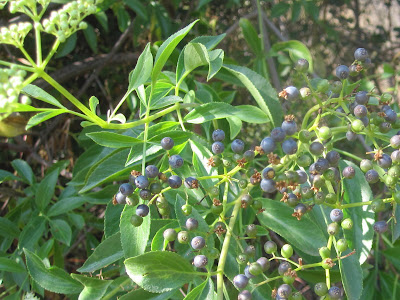 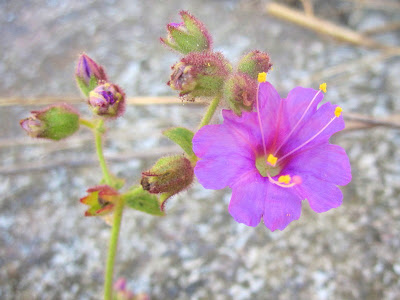 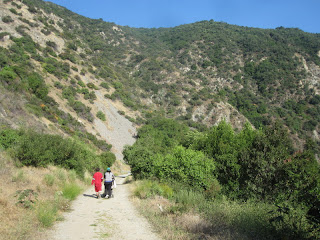