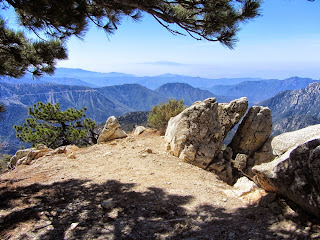 This is a splendid peak which commands a magnificent panorama over the heart of the San Gabriels Mountains. Unfortunately it eludes most people’s radar because it is a fairly short hike (a whopping 1.5 miles round trip) and conquering a “ridge” does not have much appeal to those who want to bag peaks. And the term “Kratka Ridge” is somewhat ambiguous. On one hand it labels an east-west ridgeline which defines the northern border of the San Gabriel Wilderness and the rugged Bear Creek watershed. And it is close to and roughly parallels the Angeles Crest Highway, so casual sightseers can easily access the ridge crest from several spots along the highway.

On the other hand, “Kratka Ridge” is used to label the 7515-foot peak along the ridgeline. The Sierra Club’s Angeles Chapter, Hundred Peaks Section (HPS) has a list of 275 named summits in Southern California of at least 5,000 feet in elevation. Kratka Ridge peak is on that list. And since I have a goal to climb all of the HPS peaks in the San Gabriels, Kratka has been on my list. 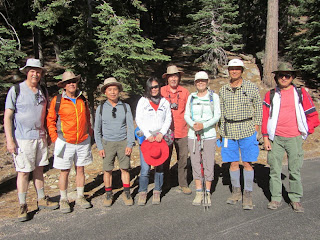 I connected with my friend Ray and he planned the outing with his Hikemasters hiking group. There are nine of us for today’s hike…the same number we had when we bagged Winston Peak, Buckhorn Peak (aka Mount Akawie), and Mount Lewis back in September. We rendezvous at 7:15 on Saturday morning at the Highway 2 meeting location in La Canada. We drive 35.5 miles up Angeles Crest Highway to the old to Vista Picnic Area (highway marker 60.54), which is about 2.3 miles past the entrance to Buckhorn campground. Ray had dubbed me as the leader, so as a disclaimer, I make sure everyone knows that this was my first time on this trail…blind leading the blind. 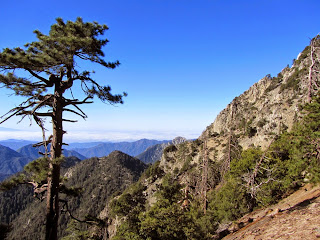 8:30 a.m. - Begin hike. The weather is beautiful, but a little nippy. The group wonders why I’m the only one not wearing long sleeves. I figure once we get climbing in the sun, I’ll be quite comfortable. We stroll up the path under a rich canopy of pine and fir, and in about 150 years reach a saddle on Kratka Ridge with a superb view down into Bear Creek and beyond. The distant valleys are covered with a layer of June gloom. 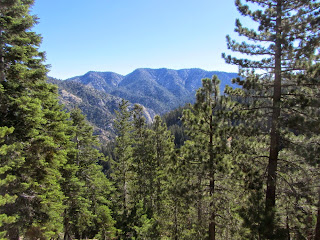 After a few minutes of enjoying the view, we turn right (west) and begin to follow the well-defined route up the ridge. Now I’m glad I’m not wearing long sleeves. Soon the route veers right and follows an old service road along the flank of a highpoint on the ridge. Intermittent views through the trees give us glimpses to the north toward Mt. Williamson, Pallet Mt., and Will Thrall Peak. The massive Williams Rock, which in the past, would be swarming with rock climbers, stands in solitude, thanks to a yellow-legged frog. It troubles me that a frog is given priority over the rights of people to recreate in the national forest. Our pace is relaxed as we stop to look at pine cones and snow plants and just enjoy the beauty of this splendid high-country forest. 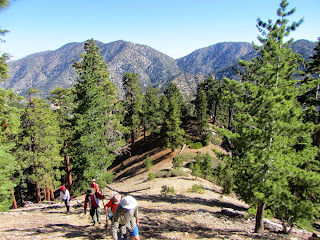 We reach a slight saddle on the hip of an ascending/descending ridge. We are now on the western perimeter of the old Kratka Ridge ski area. There’s an outcropping on the right so we take a short side jaunt to see what views it offers. Back on the trail comes the fun part. The route turns left (south) and steeply climbs the ascending/descending ridge. It’s really steep, but thankfully it takes only about five minutes of climbing to reach another old service road. We veer right (southwest) and in another ten minutes arrive at a saddle on the ridgeline offering more great views south. 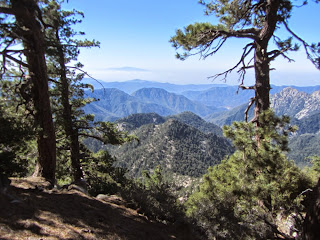 After lingering for a few minutes soaking in the scene, I decide to turn left (east) and climb to a summit of 7400+ feet. It’s only about 100 feet lower than our destination so I figure it would be a good side trip. Most of the group follows. The summit has a lot of trees so it does not offer the kind of views I had hoped for, but still it is a rewarding climb with some nice vistas between the trees. We head back down to the saddle and join up with the others. 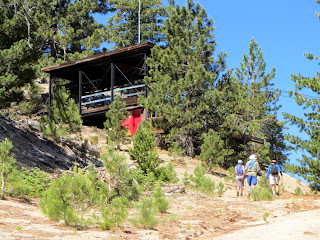 From the saddle we climb the wide ski road west. In about five minutes we reach the upper terminus of chair lift. This now-closed ski resort played an important part of the Southern California ski industry. Lynn Newcomb Sr. started Mt. Waterman ski area in 1939 with a single rope two. Three years later, Newcomb built the first chairlift in SoCal at Waterman. In 1954, Newcomb opened the Kratka Ridge ski area just two miles east with a single chair lift…60 years ago. In 1999, both ski areas were sold to a new owner and renamed Angeles Crest Resorts. Efforts to revive the resorts failed. The last known year of operation for Kratka Ridge was spring 2001, and Mt. Waterman February 2002. (Source: Southern California Lost Ski Areas by Eric Gieszl) 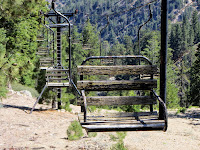 We explore around the old bullwheel facility. Weather-worn single chairs hang ghost-like from the cables. There is a lot of history here.

From the backside of the bullwheel facility, a distinct path heads up the ridge. We follow this path about 200 yards to our destination. 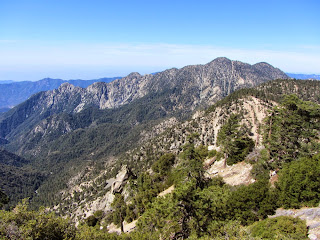 10:00 - Kratka Ridge summit (7515’). Wow, this exceeds my expectations! An unobscured 180-degree panorama south stretches from Mt. Williamson in the east to Mt. Waterman in the west, with the vast San Gabriel Wilderness below our feet. Dozens of named peaks punctuate the topography. Distant haze blankets the vast human sprawl of the L.A. Basin beyond the mountains. Saddleback in South Orange County pokes above the marine layer. The weather is perfect. The sky above is deep blue. I love the vanilla scent of Jeffery pine. Directly across the northwest fork of Bear Creek, Triplet Rock (6151’) stands culminating the ragged ridgeline descending east from Twin Peaks East Peak and is perhaps the most inaccessible point in the San Gabriels.

Everyone in the group seems pleased with this lofty destination. We pose for a group picture and enjoy the scenery. As the group starts back I linger to take a few pics and shoot a panoramic video with no voices. Soon I hear the group chanting my name from the ridge below, suggesting that it’s time for me to join them. 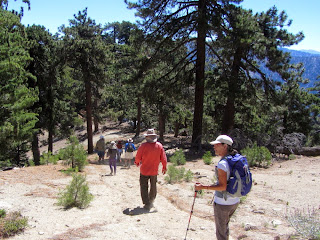 10:20 - Leave summit. Soon I join that group as they have a snack in a shaded flat area near the ski building. A weather-worn picnic table has seen better days. A nice thing about hiking with a group is swapping stories and enjoying good conversation. I take pictures of yerba santa and penstemon, some of the few species of flowers in bloom today. We retrace our steps down the mountain. I lead from the rear. It’s such a beautify day with splendid scenery. 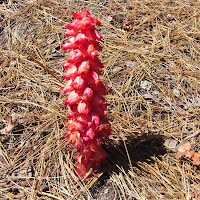