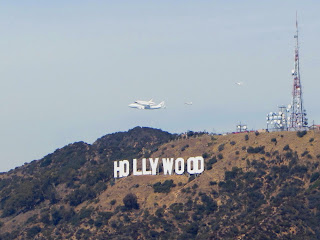 I love combining a hike with participating in a significant event. And Griffith Observatory has hosted some winners: Its 75th anniversary, solar eclipse, Venus transit. And today it was one of the sites for watching the Space Shuttle Endeavor make its final flight to its museum home in Los Angeles. It was scheduled to fly over Malibu Beach, Getty Center, Los Angeles City Hall, Science Center, Universal Studios, Hollywood Sign, Griffith Observatory, JPL, Disneyland, Boeing, USS Iowa, and land at LAX. For me, the obvious site choice to view the historic flight is my beloved Griffith Observatory. Riding a bus, a train, and a bus delivers me to Los Feliz Blvd and Vermont at 9:26 to begin my walk into Griffith Park. There’s a gazillion cars. I think the half-mile walk is faster than driving. As I enter the park I see cars parked everywhere. The place is a bustling. There are free shuttle bus rides from the Greek Theatre, but I’m a hiker!

9:42 - Begin hike up Trail #11, East Observatory Trial. It’s been a few years since I’ve been on this trail so I’m eager to re-walk it. The climb starts steeply. The forecast is for a hot day and it’s already getting warm. There’s lots of people on the trail. Soon the views south reveal a very hazy horizon. I pass a lot of folks who are probably not used to climbing mountains. I’m feeling an excitement as I think about experiencing the shuttle flyover with a throng of people. 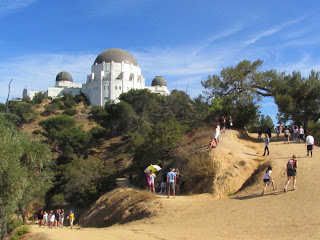 9:53 - Five-way junction. There’s a small crowd. Streams of people are hiking the east approach from Ferndell. The Hollywood Sign stands proudly on distant Mount Lee awaiting the space visitor. The grand observatory sits majestically on the hill above me. Ant-like people line its terraces. Wispy clouds add character to the pale blue sky. I turn north for the final pitch. Young and old are making the climb. Some are running. Some have dogs. Some have umbrellas. Everyone is sweating, particularly those who are running. 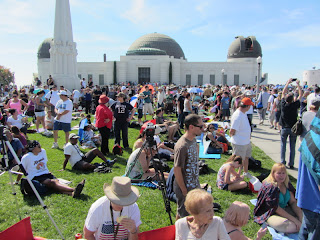 9:59 - Griffith Observatory. Wow. I pause for a moment and gaze upon the mass of spectators covering the observatory grounds. I wander through the crowd just soaking in the spectacle. Maybe I’m part journalist, for to me, the story isn’t just a space craft but the amazing collection of humanity who have gathered here. The crowd is colorful and eclectic and shimmering with frenetic energy. There is a small armada of news vans. I stroll over and photo bomb Colleen Williams with NBC4 shooting a news piece.

The summit of Mt. Hollywood to the north is crowded with sightseers as streams of more ant-like people climb its steep trails. 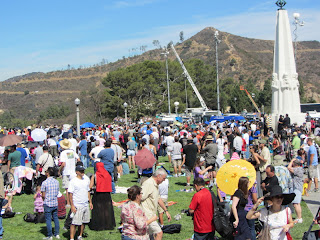 Most people are staked out in their spots with chairs, blankets, sitting, laying, and standing. Long lines are cued up at the restrooms. I hear from an observatory employee that the flyover has been delayed an hour. I continue to meander through the scene and capturing images. It’s hot. Every bit of shade is occupied. Fire crews arrive and began to treat people for heat. Even the bomb squad is here. The crowd continues to swell as shuttle buses keep arriving. There’s an anxiousness in the air. We are anticipating the shuttle to come from the west. As I’m standing on the great lawn toward the west side... 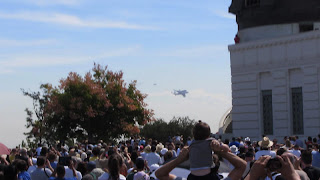 11:57 - Finally, a wave of excitement flows through the crowd as it begins to focus on the southeast. A cacophony of clapping and cheering erupts. Trees obscure the view. I get my first glimpse of Space Shuttle Endeavor riding piggyback on the 747. I roll video and zoom in as the shuttle disappears behind the observatory. I move more to the west end and prepare for the flying spectacle to emerge. It doesn’t. It disappeared! I make my way through the crowd to the south side of the observatory and learn that the shuttle did a u-turn and headed south into the hazy sky. I position myself among the throng on the west terrace, now gazing to the west. Excitement builds. 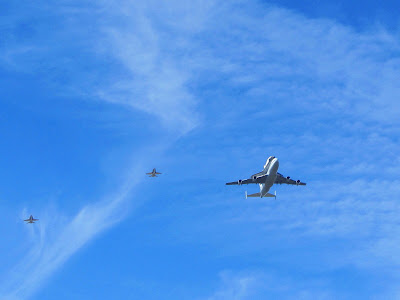 12:06 - We spot the flying duo coming from the west toward us. The crowd is gripped with anticipation. The shuttle gets closer and closer. It’s hard to locate it on my camera screen while zoomed in at 14x. There is a collective sense of awe as the huge jet with its spaceship passenger lumber overhead along with two fighters escorting it. The moment is short as the aerial display disappears over the observatory. 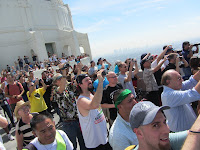 I begin to head back toward the front of the building and I notice the crowd rotating to the northeast. The shuttle banked north and then west and is now flying beyond the crest of Hogback Ridge on its way toward Universal Studios. I get a shot. Endeavor disappears momentary behind Mt. Hollywood and reappears over the Hollywood Sign for the money shot. The emotions are beyond words. What an extraordinary moment! I get a couple more shots then turn my camera toward the crowd to capture the scene.

The shuttle banks west and disappears into the haze again but only for a minute. Now out of view it does a u-turn and begins to come back. The excitement grows again. The flight now passes to the south side of the observatory. I struggle to find it in my screen. I really need a SLR! I hope that I got a good picture. I get one last shot as the shuttle passes behind the huge copper dome. 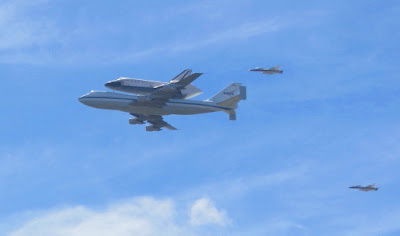 I walk back to the front lawn toward the trail and get another shot as the flight fades into the eastern haze, I think it’s on way to NASA’s JPL in Pasadena. No need to linger; I’ve got to get to work. 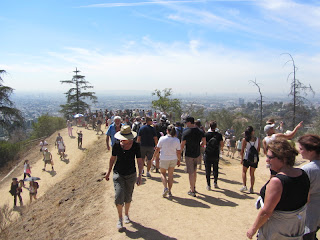 12:14 - Begin descending East Observatory Trail with the crowd. It reminds me of leaving a baseball game. It’s dusty and hot. There is a little commotion as the shuttle is spotted to the east heading back south toward downtown. It fades away. Seems like there needs to be the swell of theme music and the roll of credits. Winding down the road, I continue to capture images of departing spectators. Angelinos are a motley assortment. I think the last time I was down this route was in the dark while leaving the celebration for the observatory’s 75th anniversary a couple years ago.

12:35 - Trail end at Boy Scout Road. This place is again bustling with cars and people. I’m glad I’m not stuck in the traffic jam. A 12-minute walk down Vermont delivers me back to Los Feliz Blvd where I catch an east-bound Metro 180 and head to work in Echo Park.

Epilog - What an extraordinary day! There is something about a shared experience that makes an event like this even more special. The retired shuttle fleet marks an end of an era. Today I think about my dad, Edwin Simpson, who retired from the U.S. Air Force after 21 years of military service followed by a career in aerospace. He died in 2000. He would have loved being here today. Well, maybe he was looking down on it. Thanks dad for giving me a love and appreciation for machines that fly. 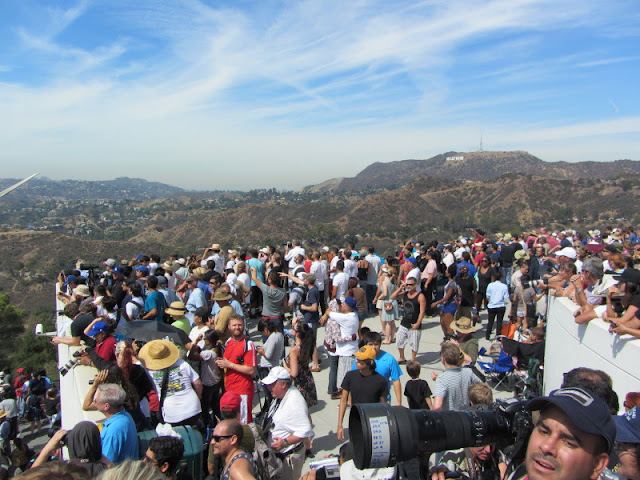