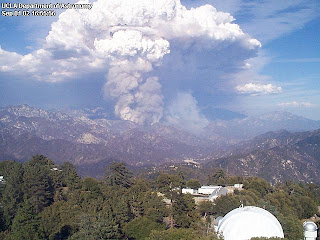 Labor Day weekend, 2002 hosted the perfect storm of conditions for a horrific inferno: Hot temperatures, dry vegetation from drought conditions, low humidity, gusty winds, and rugged terrain. And the Angeles National Forest was crowded with visitors for the holiday weekend.

On Sunday, September 1, 2002, I was at my home in Azusa gathering my gear for an overnight backpacking trip up Hawkins Ridge above Crystal Lake that afternoon. It was around 1:30 p.m. when the phone rang. It was my friend Dave.
“Have you seen it? Dave asked.
“Seen what?” I replied.
“Step out and look north.” he said.

I rushed out into my front yard and looked toward the mountains. There before my eyes, a huge smoke plume rose high into the sky. My heart sank. All I could do was cry out in anguish.

Officials believe the fire was started by cultists burning candles as part of a pagan ritual. The ignition point was at the bend of Highway 39 in San Gabriel Canyon near the junction of the West Fork. The inferno raged with unimaginable speed and ferocity as it devoured everything it path. Hundreds of forest users were hastily evacuated. An army of fire fighters bravely attacked the blaze from the ground and the air.

By the time the Curve Fire was contained three weeks later, it had consumed 20,857 acres of our Angeles National Forest, including incinerating most of the Crystal Lake Basin, much of the Sheep Mountain Wilderness, and the historic South Hawkins Fire Lookout. Then on September 22, the Williams Fire began its rampage near Williams Camp in the East Fork San Gabriel River. By the time that fire was contained, it had destroyed 37,240 areas. In fact, the two fires met and became known as the Curve-Williams Complex, burning more than 58,097 combined acres of our forest.

I know that wildfires are a news story that we are all too familiar with as many thousands of acres are burned every year. Sometimes we even get a little jaded to it. But it’s different when the fire is in your own backyard destroying the forest you love. 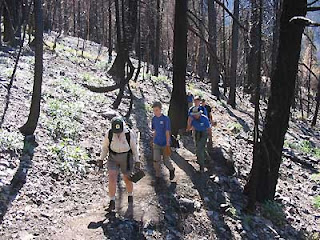 The fire damage was significant and the Crystal Lake area was closed for many months, which turned to many years. The following June, I went to the Forest Service office in Glendora to see when Crystal Lake would be reopened. They had no idea but did not anticipate anytime soon. They did mention, however, that the San Gabriel Mountains Trailbuilders were restoring trails at Crystal Lake and I could hook up with them. So I did and on June 21, 2003, I got my first up-close experience of the horrific fire damage. Over the years while Hwy 39 and Crystal Lake were closed, I continued to work on trails with the Trailbuilders and watched the area slowly recover. It was disheartening at times to work on trails that the public did not have access to. But we knew that if we did not keep them maintained, they would be lost.

Finally, after more than 8 years of closure, on March 22, 2011, CalTrans reopened Highway 39 and the general public could once again enjoy the Crystal Lake Recreation Area.

Today, on the 10th anniversary of the Curve Fire, I pause for reflection. I think about the courageous firefighters who battled on the front lines and an army of other firefighting personnel from pilots to base camp cooks. Once the smoke cleared and the fire was out, years of restoration followed. I think about botanists, foresters, chainsaw operators, engineers, road crews, utility workers, heavy equipment operators, carpenters, hand crews, pack animal wranglers, skilled tradesmen, volunteers...many people who deserve our thanks and appreciation. 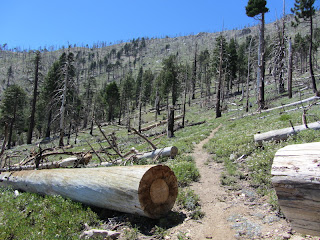 The scenery at Crystal Lake is very different from its former splendor. What used to be a rich, mature forest is open and barren looking. Dead trees by the thousands starkly jut into the sky and are scattered like toothpicks on the steep slopes. But nature has a way of demonstrating beauty in various forms. Today, the thousands of acres scorched by the Curve Fire still offer a rich outdoor experience with blue skies, sweeping vistas, towering mountainsides, and superb high-country destinations.

Links on Dan’s Hiking Pages and Blog pertaining to the Curve Fire: