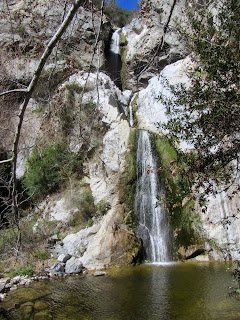 Hiking to Fishing Canyon Falls in the springtime has been my annual tradition since April 2005. That was the year Vulcan Materials began to provide free shuttle access through the quarry on select Saturdays. But since the new access trail opened on June 21, 2014, hiking Fish Canyon is a 365-days-a-year possibility.

Over the years Fish Canyon has been a nearby laboratory for me to learn about plants. For this hike I was privileged to join up again with Michael Charters, esteemed author of CalFlora.net. Our original plan was to hike on Saturday, but I heard from Jeff at Vulcan that last Saturday the 100-car parking lot was completely full by 9 a.m. So we switched to Friday to avoid the crowds.

Since I’ve blogged so much about Fish Canyon over the years, I’ll just hit the highlights of this hike and share a few pics.

Michael and I rendezvoused in the parking lot at 7:30 a.m.—the first two cars there. This was my first time walking through the quarry on a weekday when it was in operation, so it was fun seeing the heavy equipment at work. Our pace was casual and it took us 20 minutes to reach the bridge. Once on the trail we moseyed along, observed plants, and took lots of pictures. The canyon was much more alive than when I was here on January 17. The deciduous trees and bushes are leafing up and the poison oak is back with a vengeance. 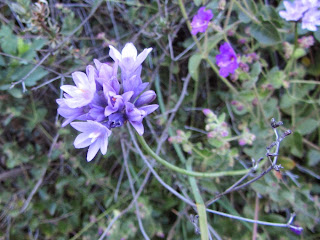 Today the dominant flower was blue dicks (Dichelostemma capitatum). And there was more spreading larkspur (Delphinium patens) in bloom than I had ever seen. There were a lot of small inconspicuous plants with tiny flowers that typically evade my attention. But Michael was great in helping me become familiar with such plants as silver puffs (Uropappus lindleyi), common senecio (Senecio vulgaris), chickweed (Stellaria media), strigose lotus (Acmispon strigosus), California saxifrage (Micranthes californica), and turkey pea (Sanicula tuberosa).

The temperatures were pleasant for most of our hike but later on it climbed into the 90s. We encountered other hikers throughout the day and enjoyed chatting with some. The trail did not feel crowded.

We arrived at the falls at 11:10. It was flowing modestly and will not last long into the summer unless we get some more good rain. There was a group of about a half dozen college students swimming and jumping off the rocks. We had some lunch and started back at 12:10. Along the way we discovered some occurrences of the rare Dudleya densiflora that neither of us had remembered seeing before. We enjoyed our stroll back. It always puzzles me as to why people begin a hike in the middle of the day when it is so hot.

We finished the hike at 2:00. There were four other cars in the parking lot.

Epilog – What a thoroughly enjoyable outing! I so appreciate Michael Charters’ vast knowledge of plants and his generosity of sharing with others. I love Fish Canyon and look forward to more visits in the months to come as spring unfolds its floristic display.

See Waterfalls of The San Gabriels at Dan's Hiking Pages