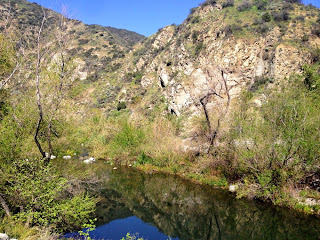 This short walk along the San Gabriel River in Azusa makes a pleasant venue for a causal saunter. It’s one of my nearby scrappy hikes that I can enjoy when I don’t have much time available and just need to get into the outdoors. The “trail” is actually the Old San Gabriel Canyon Road, which was a main artery into the mountains before Morris Dam was built upstream and occasioned the construction of Highway 39 high on the canyon’s west wall. The old canyon road starts at the El Encanto Azusa River Wilderness Park and follows the canyon wall above the winding river and ends in a mile just past an old gauging station at river level. 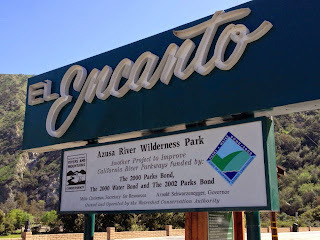 The park closed after the January 2014 Colby Fire because of landslides onto the old road. My objective today is fourfold: Enjoy the outdoors, survey the blooming plants, check out the route conditions, and gather data to build a trail guide on Dan’s Hiking Pages.

I pull into the large parking lot and am surprised to see about 20 cars. Typically I like to start hikes early in the morning, but today I decided on a midday hike so that I could capture the scene in full sunlight.

11:25 - Begin hike. The temperature is pleasant and the warm sun feels good. The chaparral and weedy grasses are greening up nicely after some recent rain. Leaves are returning to the sycamores and poison oak. There are still some puddles in the road, which I think are primarily from seeps. The berm along the outside edge of the road is evidence of heavy road grading. At the beginning, about the only things in bloom are weeds like oxalis, filaree, dandelion, mustard, tree tobacco, and caster bean. There is also periwinkle (Vinca spp.), which is an escaped landscape plant. But as I wander along, native blooms begin to appear too: wild cucumber, hollyleaf cherry, oak, ceanothus, elderberry, phacelia, sunflower, blue dicks, wild morning glory, miner's lettuce, and mule fat.

The rushing river below provides a pleasing soundtrack. The noisy voices of hikers behind me are not so pleasing.

I stop and let them pass. I am thankful that the fire damage on this side of the ridge was minimal. The trail ascends gently for about a half mile, then it begins a gentle descent as it follows the bend of the river. I encounter several parties of trail users as they return. Some are pushing strollers. My pace is relaxed as I photograph plants and soak in the beauty of the canyon. Vehicle noise from Hwy 39 across the canyon is muffled aside from an occasional motorcycle.

12:06 - Gauging station. A concrete dam juts into the river forcing the water to flow through a narrow channel. A group of about a half dozen young adults clade in beachwear are basking in the sun and enjoying the river. The party of noisy voices is here too. After lingering for a few minutes, I continue past the gauging station about 150 yards to where the wide road ends and the route becomes a rustic path. It’s not bad at first but then it gets pretty rough. But the payoff is a beautiful natural river scene. Soon the narrow path climbs high on the bank crossing a landslide to circumvent obstacles at water’s edge.

The climb down is a little precarious but I press on. I then carefully negotiate a scree slide with large jagged rocks. 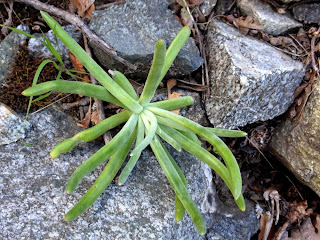 Just before reaching the riverbed, I encounter a lone occurrence of the rare Dudleya densiflora. According to the interpretive sign in Fish Canyon, this member of the Stonecrop family apparently grows only in three places in the front range canyons of the San Gabriels: Fish, Roberts, and San Gabriel. I’m delighted to find this plant here. I know there is a large population of the rare plant along the first portion of the road, but I did not notice it today.

I cross over to the wide flat area at the sharp bend of the river (where the river bends north). This is as far as I’ve gone on a previous outing and it’s where I’ll turn around today. I’ve contemplated the doability of continuing up river but it will take some planning, and it might not yield anything making it worthwhile.

12:40 - Head back. I retrace my steps and arrive back at the gauging station at 1:00. There is no one left here. I enjoy an easy-going saunter back and do not encounter anyone else. As I round the bend to the last quarter mile, I am carefully scanning the steep, rocky face looking for the Dudleya densiflora. And there it is. Most of it is above eye level, so one would need to be looking for it to spot it. There is quite a robust population of the rare plant between here and about 150 yards from the beginning of the trail. It really does live up to its Stonecrop family name as it grows right out of the sheer rock face.

1:34 - End hike. There are only two cars left in the lot, and those might be associated with the conservancy.

Epilog - What nice outing! Blue sky, warm sun, pleasant temperatures, a rushing river. I love the mountains as we emerge from winter into spring. There is a freshness of beauty as plants come to life. This is not a grand trail by any means, but it certainly provides a causal walk for nearby residents who want to get out and enjoy the outdoors and a riverside setting.