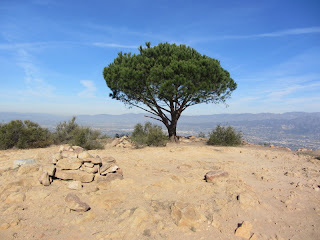 Burbank Peak remained as the final named summit I had yet to climb in Griffith Park. Actually, along with Cahuenga Peak, Burbank Peak was added to Griffith Park in 2010 thanks to the efforts of The Trust for Public Land. They raised $12.5 million to save 138 acres from development to preserve as open space.

I had climbed to Cahuenga Peak a couple times before from the east approach and had eyed the path heading west toward that lone tree at the end of the ridge. I had not seen any write-ups for the route from the west, so after studying the aerials, I was ready to bag Burbank Peak. And it seemed to be a fitting end-of-the-year hike. 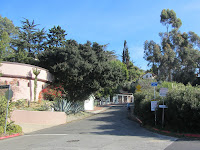 The skies over Azusa were clear and beautiful when I arose on Friday morning, but as I drove into L.A., the marine haze murkied the sky. Driving north on the 101, I exited on Barham, turned right onto Lake Hollywood, meandered through the residential area, and arrived at the intersection of Wonder View Drive. I love the bird’s eye view on Bing maps. I had gotten so thoroughly familiar with the area from flying around on Bing, that when I drove up, it seemed like I had already been there before. 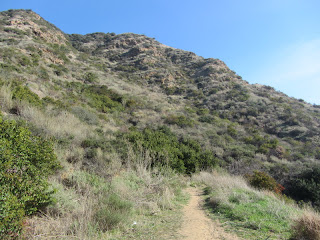 10:00 AM - Begin hike, walking 0.2 mile up Wonder View Drive to the locked vehicle gate. I walk around the gate and up the dirt road, passing a large water tank on the left. Just short of the power tower, the route cuts to the right (east). Climbing the narrow, rugged trail feels like actually hiking compared to the wide dirt roads in other parts of Griffith Park. The sun is warm. I love the aroma of the chaparral. The thick haze choking the city makes for very limited visibility. There is virtually nothing in bloom but plants are greening up from the rains. At 10:29 I reach the switchback and make the final pitch to the ridge. A young man and woman pass me coming down. At 10:35 I arrive at the ridge and get my first look at the Tree, about 60 yards to the left. 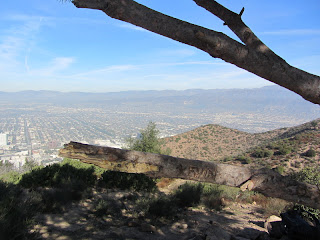 10:37 - Burbank Peak (1690’). Two men and a dog are standing by the tree taking pictures. This summit provides stunning views of the human sprawl, but thick haze shrouds visibility today, particularly to the south. The panorama of the expansive San Fernando Valley to the north is not as obscured. The Hollywood Hills Fire of March 30, 2007 incinerated more than 150 acres on the northern slopes of Burbank Peak. Aerial images from Bing show horrific damage, but thankfully the chaparral is recovering nicely. Another 15 years and it will be as good as ever. 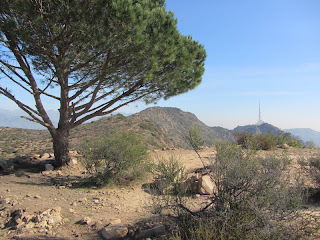 The icon of Burbank Peak is the lone, round pine tree. It’s commonly called The Wisdom Tree and also referred to as Ginger Rogers Tree (dating back to the 1940s when the famous actress was romantically involved with Howard Hughes, who owned the land and wanted to build a mansion on it for the two of them). The fascination over the tree is almost cultish. It even has a website (http://www.t2k.com/mytree/). I enjoy browsing the summit log...signed by a very different clientele than those who climb typical peaks in the mountains. I leave the peak at 11:10 and count 77 steps to the junction. I continue along the well-beaten path up the ridge toward Cahuenga Peak. Evidence of fire abounds. 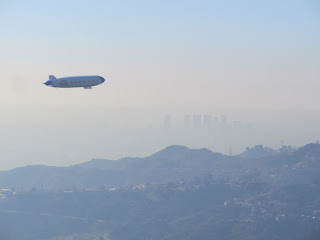 11:24 - Cahuenga Peak (1820’), the highest summit in the Hollywood Hills. This approach from the west is much more like a real hike than coming up the paved Mt. Lee Drive. Most of my hikes in Griffith Park are in the late afternoon when the lighting is warm and rich. Today’s midday lighting is not great for photos and the murky skies are not particularly appealing. But I’m enjoying the outdoors and the winter chaparral. I value the solitude and am always amazed that I can be alone on a splendid peak like this in the view of human sprawl of a gazillion people. A Farmers blimp floats over Hollywood. 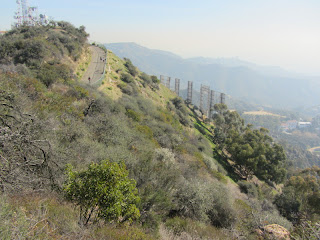 I leave the peak at 11:30 and head east on the narrow, rugged path. As I approach the saddle I can look west and see the Tree on Burbank Peak. To the east tiny figures gather on the summit of Mt. Lee. The rugged, mature chaparral below me to the north stands in stark contrast to the dense human development beyond, with Forest Lawn providing a pastoral margin. I now climb and at 11:42 I reach the predominate knob on the ridge. I had pondered the idea of descending the long ridge southwest from here, but fence blocking the route a half mile down surrounds what appears to be a steep hillside vineyard. Soon I get a glimpse of the Hollywood Sign as I continue east along the ridge. Reach paved Mt. Lee Drive at 11:48. The portion of the chain link fence that used to block this trail is now removed. I’m guessing officials opened it up since the property is now public. 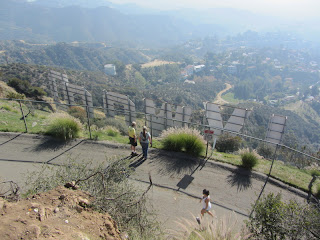 11:50 - Mt. Lee (1680’). Actually I’m not at the summit quite yet, as I’ve stopped to look at people looking at the famed sign, just below the road. Lots of people are coming and going. Views beyond the local hills are virtually non existent. I scamper to the top to join more people. I see sightseers on the dirt road far below, no doubt seeking the best shot of the 50-foot tall, 450-foot wide Tinseltown icon. Toward the west my line of sight toward the Tree is block by the prominent knob on the nearby ridge. A young lady arriving on the summit complains of the “smog.” I gently point out that 90% of it is marine layer, not smog, albeit not really a consolation for the dismal visibility. 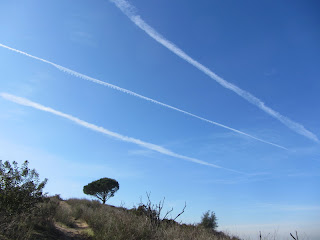 I leave Mt. Lee at 12:05. When I get to the trail junction, I momentary ponder continuing down Mt. Lee Drive for an alternate return, but decide not. I retrace my steps on the rugged path along the undulating ridge. A young lady passes me in the opposite direction. I pass over Cahuenga Peak and continue west. When I arrive at the junction I take the remaining steps to the summit of Burbank Peak again. After lingering a few minutes I head down. A young man and women pass me heading up. All totaled for the day on the trail (not including Mt. Lee) I encountered only eight people in five parties. That is surprising sparse considering the massive population that surrounds these hills. 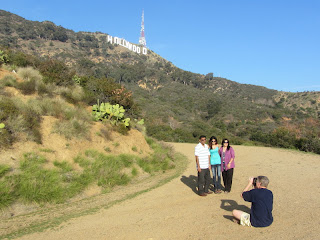 I now drive south on Lake Hollywood Drive to Tahoe Drive to Canyon Lake Drive to the end near Innsdale Drive. From here, a dirt road penetrates an undeveloped portion of Griffith Park below the Hollywood Sign. I climb the ridge some and observe new fence polls installed at intervals of about 100 feet up the mountain side. Judging from the map, they appear to be marking the park boundary. I snap some shots of the Hollywood Sign then head back down. I follow the dirt road east with more views of the sign. I’ve not explored this portion of the park before. The road terminates between two house on Mulholland Hwy. I walk along the street past the junction of Ledgewood Drive. The road becomes dirt and I arrive at the location where I could see sightseers from above. Signs clearly forbid parking and hiking to the sign. I’m ready to be done. I retrace my steps and arrive back to the car at 3:02. 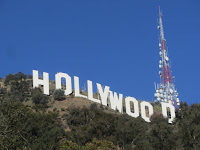 Epilog - Fun to finally conquer Burbank Peak and its iconic tree. The hikers’ route to Cahuenga Peak and Mt. Lee will make a good hike description. The poor visibility for the day leaves me wanting to return when the skies are clear. It’s been a very satisfying year of hiking. I’m always thankful for the health and means to enjoy our wonderful outdoors.

See blog posts from other hikes in Griffith Park: