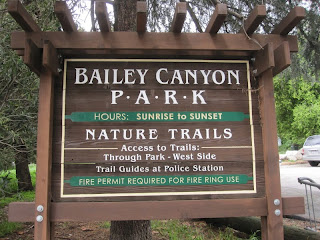 Wintry weather for the first week of spring kept me looking anxiously toward the weekend pondering the possibilities for hiking. The weekend arrived with cool temps, low clouds, and a chance of rain. All factors considered, my hiking adventure ended up being atypical for me: three hikes in one day...Bailey Canyon, a newly re-forged trail at the mouth of Rubio Canyon, and Rubio Canyon Trail to the lower falls. And mixed into that was a bunch of plant photos and celebrating with the Arroyos & Foothills Conservancy over a 41-acre land acquisition to preserve as open space.

In keeping with my plant photo theme from hiking Fish Canyon last week, this blog posting will feature plants. And like last week, the cool, cloudy weather makes conditions perfect for plant photograph. I've displayed the plants below in the order in which I photographed them. 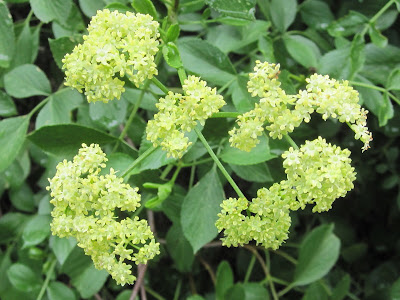 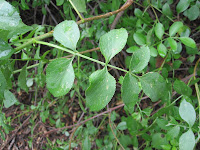 Blue elderberry (Sambucus mexicana), is a native large shrub or small tree (generally lacking a main trunk) in the honeysuckle family (Caprifoliaceae). In the fall it will yield its purple berries which are popular for jelly. It is deciduous, so it loses its leaves in the winter. 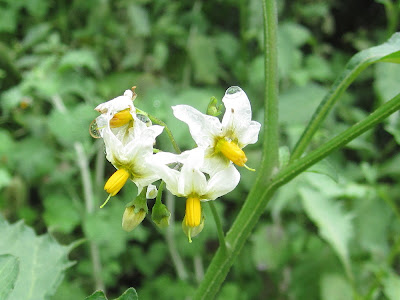 Douglas nightshade or black or white nightshade (Solanum douglasii) is a native perennial herb which produces little green to black poisonous berries. The opposites of "black" and "white" in two of the common names illustrates the idiosyncrasies of common names. 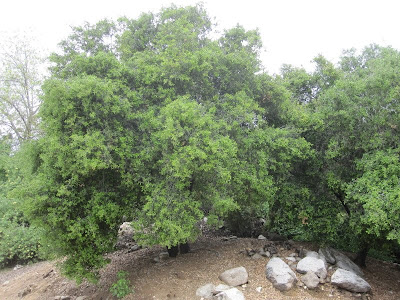 Coast live oak (Quercus agrifolia)! What can I say about the mighty oak? They can live for hundreds of years but be destroyed in a day, such in the horrible and senseless leveling of 11 acres in Arcadia in January 2011. 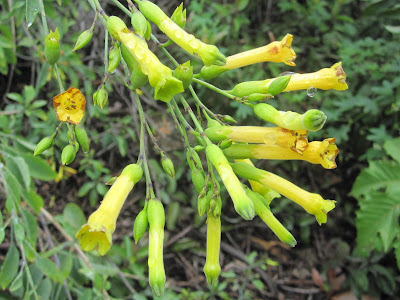 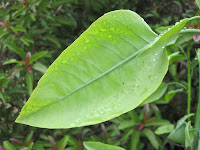 Tree tobacco (Nicotiana glauca) is a fast growing non-native shrub to small tree that was brought from South America in the late 1800s. In spite of its "tobacco" name, don't even think about smoking it...all parts of the plant are poisonous to humans. 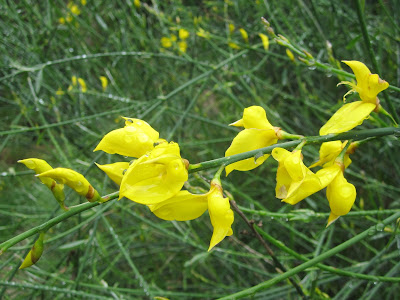 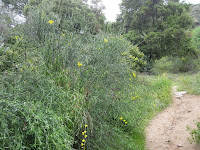 Spanish or Portuguese broom (Cytisus striatus) is another non-native shrub and can be seen a lot along roadsides and disturbed areas. It has beautiful yellow blooms and a wonderful fragrance but poses a major invasive weed problem in foothills and mountain habitats. 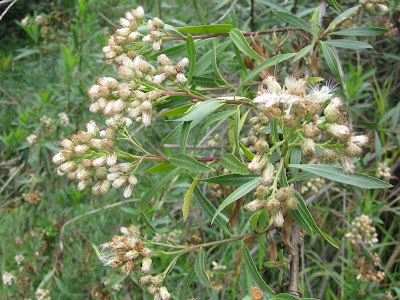 Mule fat (Baccharis salicifolia) is a native shrub in the sunflower family that grows up to 8 feet tall. It likes to grow in canyon bottoms and moist streamsides, often forming thickets. 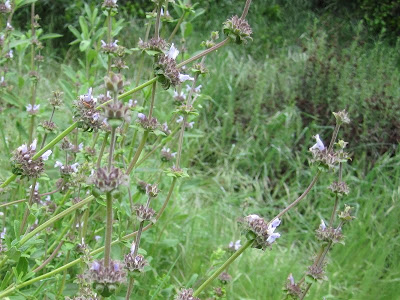 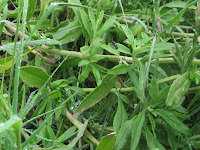 Black sage (Salvia mellifera) is a native shrub in the mint family (Lamiaceae) and is common in local plant communities. It was one of the staple, multi-purpose plants for Native Americans and pioneers. I love its rich aroma. 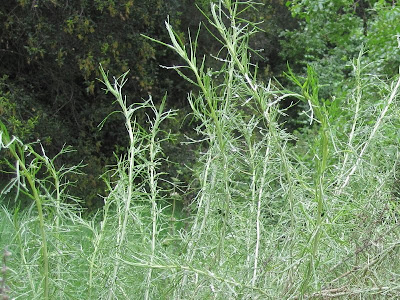 California sagebrush (Artemisia californica) is a native shrub found in abundance in local plant communities. It is not a true sage but it provides one of my favorite aromas while hiking. Its tiny, yellowish flowers bloom from late summer through December. It is drought deciduous which means it goes dormant in the hot, dry months.

Now on to Rubio Canyon in Altadena 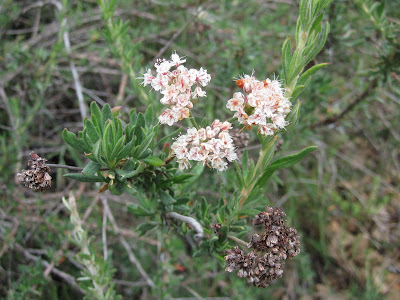 California buckwheat (Eriogonum fasciculatum) is a native shrub and one of the most abundant plants in the shrub, sage scrub, and chaparral plant communities. It's just beginning its bloom period with only a smattering of flowers, but in the next several months its pinkish white flowers will dominate the landscape. In the fall its flowers turn rust red and colorize the landscape. 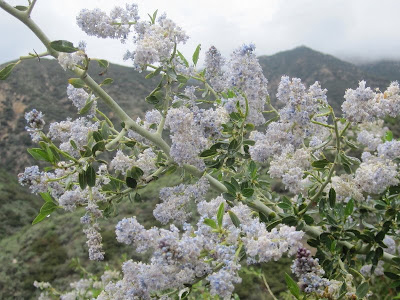 Mountain lilac (Ceanothus spinosus) is a native shrub in the buckthorn family (Rhamnaceae) and found in abundance in the chaparral and other plant communities. Both parts of its scientific name means "spiny," which underscores a common characteristics among the many species of ceanothus. 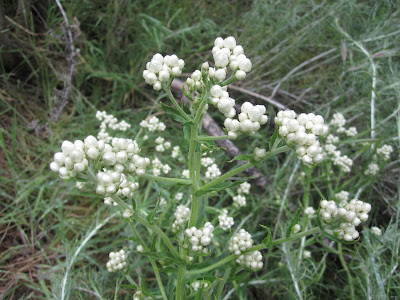 Everlasting (Gnaphalium spp.) is a native perennial herb and found in many plant communities and across the country, growing up to an elevation of 8,500 feet. It dies to its roots each winter and springs to life in the spring. 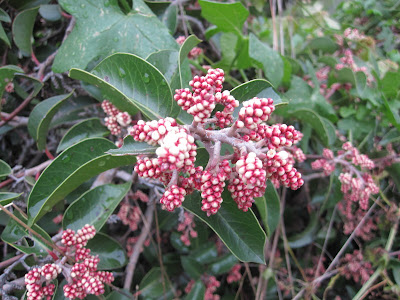 Laurel sumac (Malosma laurina) is a native evergreen shrub and abundant in coastal sage scrub and chaparral plant communities. It is related and looks very similar to sugar bush and lemonadeberry, with its distinguishing features being its taco-shell-shaped leaves. Its flowers display in white clusters beginning in the spring. 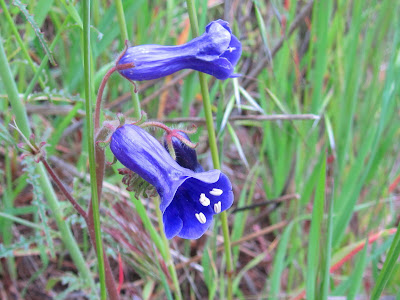 Wild Canterbury bells (Phacelia minor) is a native and grows in chaparral and coastal sage, and disturbed areas. As a fire follower, it is one of the first plants that to grows in a burned area. It blooms from March to June. 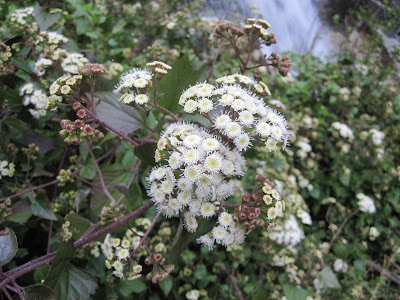 Eupatory or croftonweed, thoroughwort, sticky snakeroot (Ageratina adenophora) is a non-native perennial herb or small shrub that escaped and has become invasive in our local canyons, growing along the streams. It looks pretty but is destructive to local habitats. 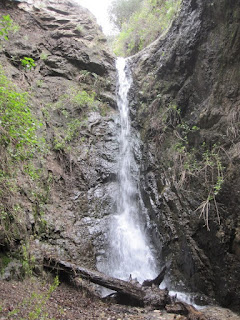 Epilog - What an enjoyable day of hiking and plant photograph! The trail to Bailey Canyon Falls was in reasonable condition but with lots of poison oak, some of which required a little dodging. There were about a dozen creek crossings, all of which were pretty easy except for one which passes under a large tree branch with about four feet of clearance. The waterfall was gushing nicely.

The trail in Rubio Canyon to the pavilion site was in good shape. The scramble up the creek had several places where navigating creek crossings were dicey. Some of the vegetation along the creek had been cut back since my hike in December, making the trek easier.

were gushy and beautiful. The rough use route to Grand Chasm is somewhat challenging...steep, lose footing, and quite precarious in one spot. The cool, cloudy weather with rain the evening before made for great conditions for taking pictures and hiking in canyons to waterfalls. And springtime promises more enjoyable outdoor adventures!

Recommended book: I've been really enjoying Wildflowers of the San Gabriel Mountains (Stephens Press, LLC, 2007) by Ann Croissant, PhD and Gerald Croissant, PhD, with photos by Shirley DeBraal. They have created a user-friendly guide featuring 87 plants, each with vivid color photos. Plant descriptions include brief notes about habitat, flowering characteristics, plant features, uses, uniquenesses, and meanings behind the scientific names. The flowers are grouped by color, making it easy to find what you are looking for. Since I am not a botanist, I have found the book to be great reference tool in plant identification and writing my blurbs about plants. And its convenient size fits in the pocket of my cargo pants for use on the trail. You can order the book from San Gabriel Mountains Regional Conservancy www.sgmrc.org.

Plants of the San Gabriel Mountains at Dan's Hiking Pages

Blog posts from other hikes in Rubio Canyon: