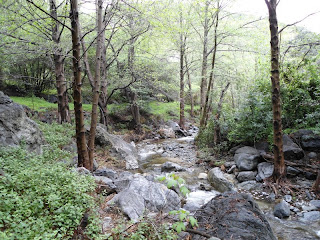 I love Fish Canyon! Even if you don't count the impressive 80-foot waterfall, Fish Canyon Trail is one of the most beautiful trails in the Front Range of the San Gabriels. I was anxiously watching the weather forecast all week and hoping there would be a window in the storm that would allow the hike. Vulcan Materials offers free access days where they shuttle hikers through the quarry to the beginning of the trail, but heavy rain cancels the event. Rain was coming down hard during the night on Friday. I awoke at 6:45 on Saturday morning and the weather was cold, cloudy, and threatening more rain. I went back to bed and an hour later was awoken by sunshine. So I quickly dressed, gathered my gear, and jumped into my car for the five-minute drive to Fish Canyon.

My primary objective for today's hike is to photograph plants, particularly blooming flowers. So for this blog I'm going focusing on plants. I've displayed the plants below in the order in which I photographed them. The cool, cloudy weather makes conditions perfect for plant photograph. And with the fresh rains, the canyon is amazingly beautiful.

I start hiking at 9:06 a.m. and immediately start snapping pics. 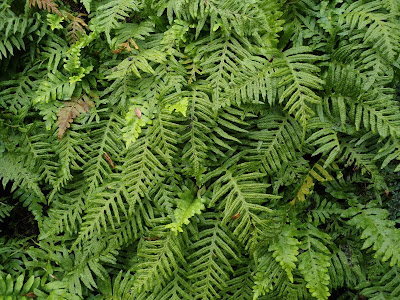 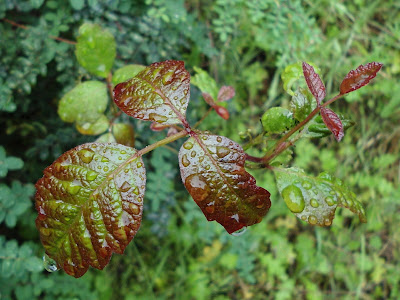 Poison oak (Toxicodendron diversilobum) makes its bold return after its leafless winter. It is in abundant along this trail and I suspect that some of today's hikers will come in contact with it and be miserable starting in a few days. 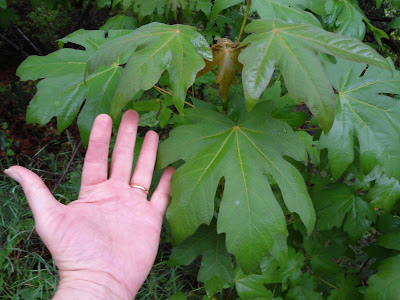 Bigleaf maple (Acer macrophyllum) is native tree and dominant in the streamside (riparian) plants communities of the San Gabriels. Its leaves are coming back after its leafless winter. 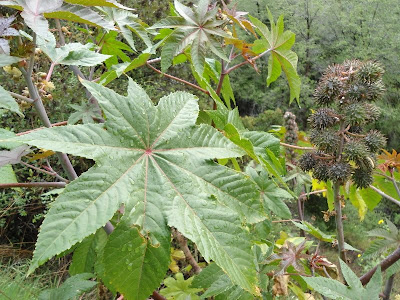 Caster bean (Ricinus communis) is a non-native shrub that was grown as crop in World War II for its fine oil used in aircraft engines. This highly toxic plant (deadly to humans and livestock) has escaped into the wild and is abundant throughout the San Gabriels. 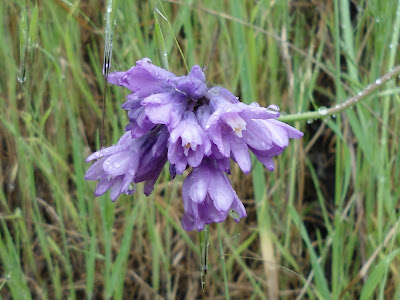 Blue dicks (Dichelostemma capitatum) is a native perennial herb in the lily family (Liliaceae) and is a common spring plant in grassy and chaparral areas. I give it the award for the dominant flower on today's hike. 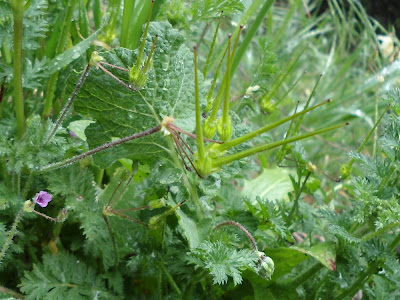 Filaree or redstem filaree or cranesbill filaree (Erodium cicutarium), or as I call it, “the weed from hell!” This non-native weed has a pretty little flower but is horribly invasive, at least in my backyard. It's common on the trails too. 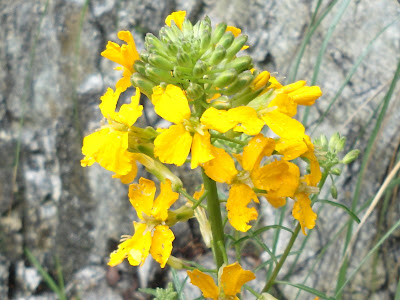 Wallflower (Erysimum capitatum) is a native perennial herb and one of my favorite flowers, found in elevations up to 13,000 feet. 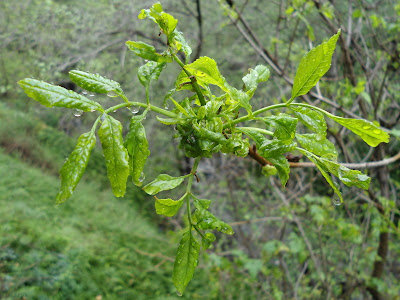 Blue elderberry (Sambucus mexicana) is a native deciduous tree and common in the San Gabriels. These wrinkled young leaves remind me of a newborn baby. 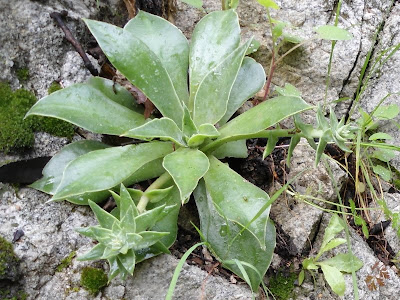 Dudleya or liveforever (Dudleya spp.) is a native succulent perennial herb in the stonecrop family (Crassulaceae). You'll see it growing out of cracks in rocks along the trail. In another month it will bloom with yellow, orange, or red flowers. 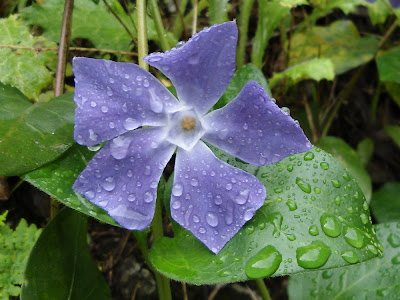 Vinca or periwinkle (Vinca minor) is a non-native vine that early cabin owners introduced in this canyon, as in other canyons in the San Gabriels. I've never understood why our beautiful native plants weren't good enough for these people. 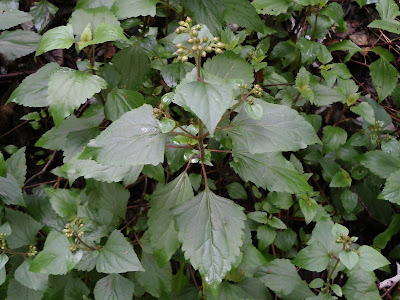 Eupatory (Ageratina adenophora) is another non-native that escaped and has become invasive in our local canyons, growing along the streams. It will produce tiny white flowers in showy clusters. 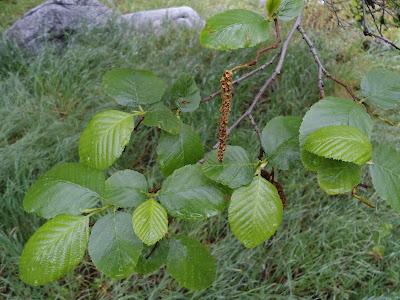 White alder (Alnus rhombifolia) is a native tree common along streams in local plant communities. It is deciduous, so its leaves are coming back after a leafless winter. 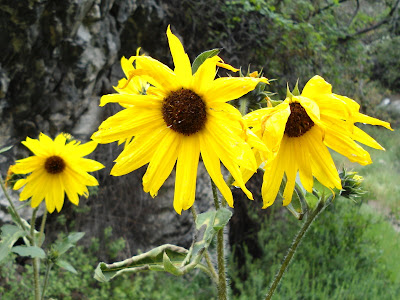 Common sunflower (Helianthus annuus) is a native herb. Its happy yellow flower is in bloom most of the year. 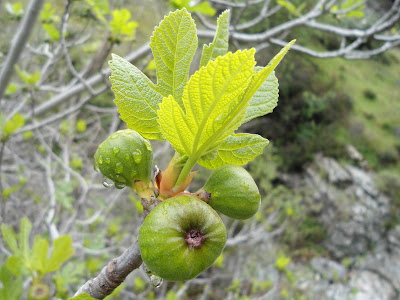 Fig tree is non-native. I don't know if it was deliberately planted by early cabin inhabitants or if it's just a volunteer. I see fig trees on various trails in the San Gabriels. It's deciduous, so it looses its leaves in the winter. 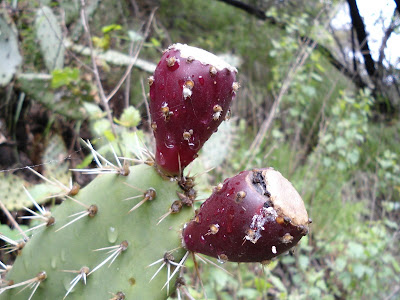 Prickly-pear cactus (Opuntia littoralis) is the most common of the native cacti of the region. Its showy yellow flowers bloom from May to July and produce this tasty red fruit. 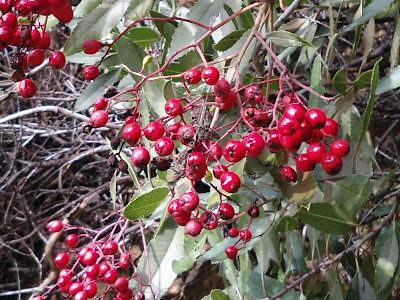 Toyon (Heteromeles arbutifolia) is an evergreen native shrub that is abundant in the plant communities of the San Gabriels. Its white flowers bloom from June through September and produce these bright red berries which provide a welcome splash of color in the winter months. 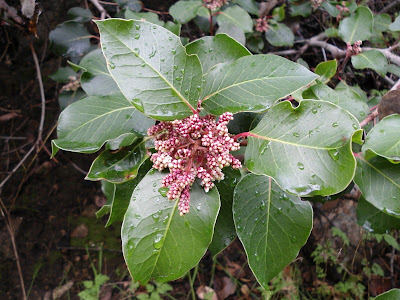 Sugar bush (Rhus ovata) is a dominant native shrub of the chaparral. Its large white flower clusters bloom in March through May. It is very similar to laurel sumac (Malosma laurina) but the leaves of sugar bush are more oval (hense, ovata). 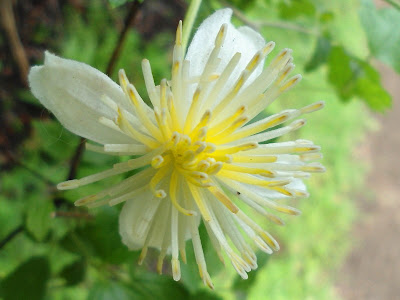 Virgin's bower or western white clematis (Clematis ligusticifolia) is a native perennial herb or vine. There are two occurrences of it in bloom today. One plant has two blossoms and the other is a large patch with thousands of blossoms. 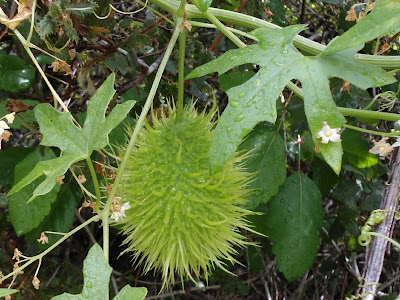 Wild cucumber or Man-root (Marah macrocarpus) is a native perennial vine which is widespread in the chaparral. Its tiny white blossoms are some of the only flowers blooming in the winter. 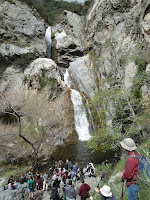 I arrive at Fish Canyon Falls at 11:16 among the throngs. I count about 60 people there. After snack and soaking in the beauty of the setting I leave the falls at 11:58. My pace is quick on the return and I end the hike at 12:37.

Epilog - A thoroughly enjoyable outing! The beauty of Fish Canyon on the first weekend of spring and after a good rain is stunning. I had a chance to connect with some hikers who I've met before or online. I added some good photos to my collection of plants. I'm looking forward to more visits to Fish Canyon as spring unfolds.