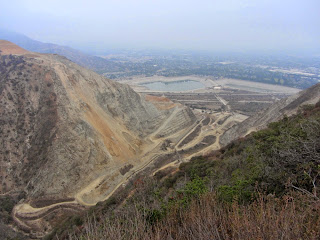 Van Tassel Ridge gained local notoriety for its role in providing access to Fish Canyon since June 6,1998 while quarry operations restricted access through the mouth of the canyon in Azusa. The access trail climbed Van Tassel Ridge, gaining some, 1,400 feet, then dropped 1,100 feet into Fish Canyon to join the pleasant trail to the waterfall. The whole access trail has been described as a horrible way to access the canyon. But for nearly a decade Vulcan Materials, the company that owns the quarry blocking access, had been courting the public with a plan to shift the mining operation from Fish Ridge on the east to Van Tassel Ridge on the west. And one of the promises was to build a new access trail going directly through the quarry. 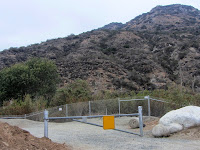 That promise was fulfilled on June 21, 2014 when the new access trail opened to the public. The old access trail over Van Tassel Ridge would be closed…except for the section from the ridge into the canyon…it remains as an orphan. But the trail segment holds promise in providing a nice climb to Van Tassel Ridge to a location above the quarry, and entirely within the Angeles National Forest.

It’s been four years (March 27, 2010) since I’ve been on that trail segment, so I’m eager to re-hike the trail to assess its condition. And the thick marine layer today makes hiking in July bearable. 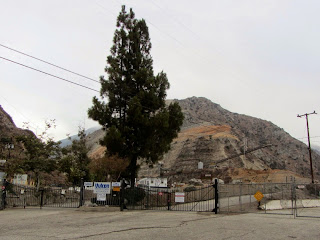 I arrive at the Vulcan Materials gate before the 7 a.m. opening time. Two other gentlemen arrive. They had planned to hike the old route up Van Tassel not realizing it had been closed. Gilbert and Alex share with me that they make this pilgrimage every year. On July 18, 1998, when the trail had just been built, their brother, Mario Alzona, was hiking to Fish Canyon Falls via the new access trail over the ridge. It was sunny and blistering hot. As Mario trudged the grueling steep dozer cut just shy of the national forest boundary, he suffered a heat stroke. By the time emergency responders arrived, Mario had died. So today is the annual climb for Gilbert and Alex to honor their brother.

The guard opens the parking lot gate at 7 a.m. and I drive in. At the kiosk, I chat more with Gilbert and Alex and we exchange taking photos. 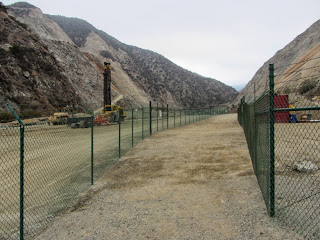 7:03 AM - Begin hike. The three of us stroll along together and talk more. I narrate some of the story leading to the opening of this new access trail. This is my third time walking this trail since it opened on June 21 and I’m still trying to grasp the reality that I can walk right through the quarry any day I want! Heavy equipment stands silent and I ponder coming on a weekday to see it in operation. 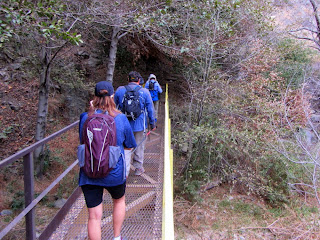 7:20 - Bridge to the national forest. Three more hikers arrive momentarily. They had read about the new access trail in the newspaper but it said nothing about this being the worst time of the year to hike Fish Canyon. But at least it’s a gloomy today. We cross the bridge and begin up the trail. Three minutes delivers us to the trail junction just shy of the first interpretive sign.

Gilbert and Alex proceed up the trail to Van Tassel Ridge and I follow at a slower pace. 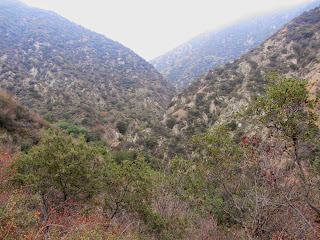 The trail wastes no time in zigzagging steeply up the west canyon wall. Dead weeds line the route. Poison oak is turning its fall red.

The trail is in pretty good condition aside from the unchecked brush crowding the path. I’m enjoying expanding views of the canyon and can see portions of Fish Canyon Trail far below. Virtually nothing is in bloom...a lone sunflower 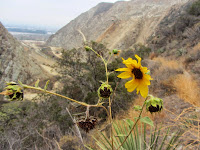 , some mustard, a cliff aster. Everything is so parched and dry. 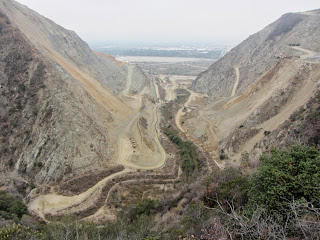 Soon striking views open up to the massive quarry to the south. Several portions of the trail are badly eroded due to foot traffic on the outside edge skirting unrestrained brush. And some sections of trail are quite steep.

I’m appreciating the gloomy weather, although, I’m sweating like a pig. My t-shirt is drenched. Marine layer shrouds the ridge tops. Across the canyon I see a clear line where firefighters stopped the Madre Fire from advance up canyon on Sept. 23, 2013 (see Tribune article, which happens to cite me).

Menacing gnats fly around my face. I spend a few minutes here. Back on the trail I continue the climb. The ascent is relentless. A zoomed-in shot of the trailhead parking lot far below reveals at least 10 cars parked there. 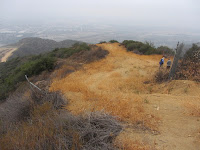 8:33 – Van Tassel Ridge (2080’). The trail arrives at the ridge about 20 yards above the fence separating Vulcan and the national forest. There is a bulldozer-size gap in the fence where previously it was just a pedestrian opening. A recently-cut firebreak proceeds up the ridge.

My guess is that the Forest Service cut it during the Madre Fire. 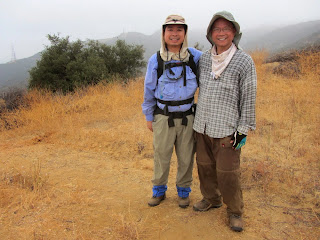 Gilbert and Alex are standing about 20 yards below the fence paying tribute to their fallen brother. I quietly wait. When they finish I walk down and join them. They are standing in the approximate location where their brother died. This will probably be the last time they are able to visit this precise spot since Vulcan will no doubt rebuild the fence to secure the quarry site. But the brothers can visit the location just above the fence and look down on the site. We enjoy good conversation.

I look south down the ridge and across the quarry site to Diamond Head and reflect on the history of this old access trail and my various hikes here. I guess my hike on that gloomy day of March 31, 2012 will be my last time on that old trail. But my sense from today’s hike is that the section of the old access trail I just climbed from Fish Canyon is certainly worth maintaining and continuing to promote as viable route to Van Tassel Ridge. And it will give the public a bird’s eye view of the mining operation from a perch totally within the national forest.

I’m keeping an eye on my watch since I should be back at the trailhead by about 9:45 to give me enough time to get to a 10:30 meeting. I had planned to hike further up the ridge but have run short of time. 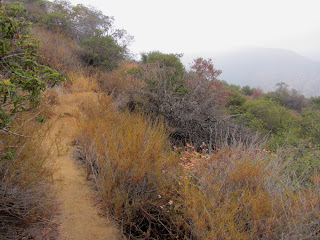 8:57 - I say goodbye to Gilbert and Alex and start my descent. I need to move quickly but carefully since the steep path is slippery in places. I put on long sleeves so I don’t have to be as concerned with dodging poison oak and to give me a little protection if my feet slide from beneath me.

Even though I have been an outspoken critic of the poor quality of old access trail climbing over Van Tassel Ridge, I’ve always liked this section of trail. I salute those who spent hundreds of grueling hours in carving out this trail through mercilessly thick chaparral on a precipitously steep mountainside.

Another zoomed-in view reveals 13 cars in the trailhead parking lot. Thankfully the gloomy weather mitigates some ill effects of hiking in Fish Canyon in its worst time of year. I hope these hikers will return in the spring when the canyon is wonderfully beautiful. On the lower section of the trail, Gilbert and Alex catch up with me and we chat more as we descend. 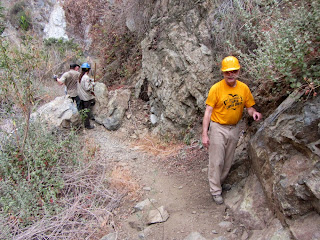 9:39 - Reach Fish Canyon Trail. So it was 70 minutes up and 42 minutes down. A couple minutes down the trail we come across several volunteers led by Fred Rice of the San Gabriel Mountains Trailbuilders. They are informally working to remove a large jagged rock along the trail which poses some risk to hikers. We visit for a few minutes. We continue down the trail, cross the bridge, and stroll down the new access trail through Vulcan’s quarry property. 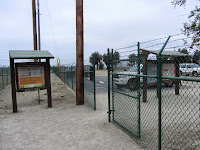 10:04 - End hike (about 20 minutes later than I had planned). There are about a dozen cars in the lot. A party of three is getting out of their truck parked in a handicapped spot. There is a placard in the window but these folks don’t appear handicapped as they are clade in their hiking gear. I have wondered if the three nicely paved handicap parking spots (legally required) would get any use since the trail is certainly not handicap friendly. A wheel chair could perhaps go as far as the “big rock,” but after that the footpath is friendly only to able-bodied folks. 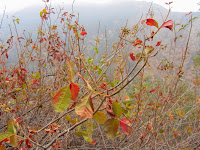 Epilog - I love Fish Canyon. Every experience I’ve had here over the last 17 years has been unique. The objective today to assess the condition of old access trail segment was successful and encouraging. It’s doubtful if the Forest Service will officially add that trial to their inventory, but certainly we the hiking community can adopt it and informally ensure its service to the public.

And I valued meeting Gilbert and Alex today and having the opportunity to share in honoring their brother Mario. We talked about how his death serves as a poignant reminder to respect nature and the seasons and take the necessary care in recreating in the great outdoors.