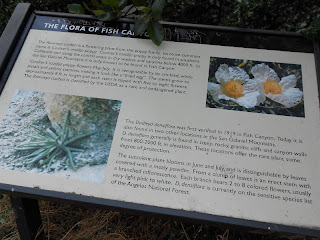 Summertime is not when I typically think about hiking Fish Canyon. To me it is a springtime hike. And I’ve already hiked it four times this year! But on Friday night I made the decision to do the hike if I wake up by 6:00 AM. Well I woke up at 6:00 on Saturday morning, thus the plan is to hike. My wife would be leaving at 7:30 to take my daughter to the airport, so I linger until my daughter got up so I could say goodbye. 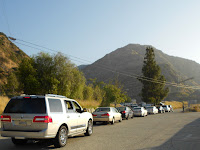 7:03 AM - Leave my house in Azusa on my bike. It’s a pleasant ride in the cool of the morning. As I approach the entrance to Vulcan Materials there are more than 20 cars lined up to get in. I roll by them and pass through the gate at 7:27 as the attendant jots down my name on the log. Lock my bike up at the office and pull away in a van at 7:36.

7:38 - Begin hike. I stay ahead of a group not too far behind me. This beautiful canyon has become a familiar friend. Not as much in bloom as in the spring, but the trees are in full leaf. Since my primary objective is to find the rare Dudleya densiflora, I proceed with a resolute purpose. 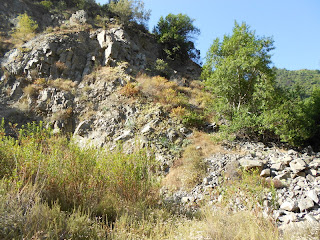 8:14 - Cross the creek and begin scanning the canyon walls for Dudleya densiflora. Bingo! At 8:15 I spot an occurrence of the rare plant 20 feet on the slope above. I don’t want to disturb its habitat. Moments later I pass through the blackberry patch and, eureka! I hit the mother lode of San Gabriel Mountains liveforever! I scamper around the rocks and take lots of pictures. Get lots of burs in my socks. The sun is unfolding on the slope so I get pics in both shade and sun. 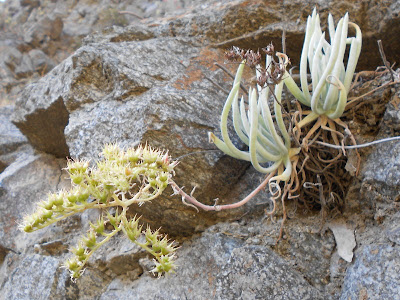 Dudleya densiflora is a native succulent in the stonecrop family (Crassulaceae) and blooms from June to July. According to the interpretive sign lower on the trail, Dudleya densiflora was first verified in 1919 in Fish Canyon. This is a rare species that apparently only grows in several places in the front range canyons of the San Gabriels around the San Gabriel River. Dudleya densiflora is endemic, which means that it is native to only this specified geographic area. That’s pretty amazing to me, that of the entire planet earth, the only place this species grows is right here! 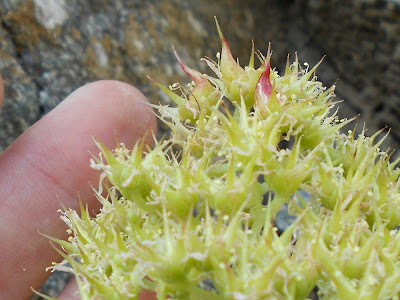 It generally is found in steep, rocky, granitic cliff and canyon walls from 800-2000 feet in elevation. According to Cliff and Gabi McLean, there are five species of dudleya in the San Gabriel foothills and canyons. Canyon dudleya (Dudleya cymosa) and lanceleaf dudleya (Dudleya lanceolata) are the most common and both occur in Fish Canyon.

After I shoot a gazillion pics, I continue up the trail to the falls. En route I carefully scan the canyon walls but see no more occurrences of Dudleya densiflora. 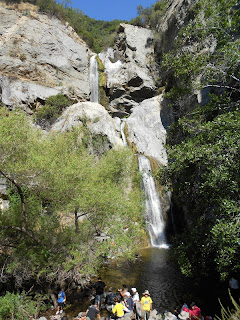 9:00 - Arrive at Fish Canyon Falls, in full sun now. Falls flowing nicely. Lots of people. Run into Chris, a gentleman I met here in May. Meet some other nice people. The crowds always give the site a kinetic energy. I am disappointed that someone had built another illegal fire since May.

10:00 - Leave the falls. Lots of people on trail. When I arrive at the creek crossing I notice some more Dudleya densiflora on the east wall just below the crossing. Climb closer for some pics. Stop by to see Darlin’ Donna Falls still flowing. Meet some more nice people en route. Wish I had the authority to punish dog owners who refuse to obey leash laws. Shame on them! Getting warm now. Meet up with a party I met at the falls and enjoy their company for the remainder of the hike.

11:46 - Finish hike and ride the van back to the parking lot, which is quite full. The attendant told me that the count was 532 people in 217 vehicles, which is the third highest count on record. Not sure if that counted my bike. Stopped by Costco on my bike ride home for a hotdog and soda. 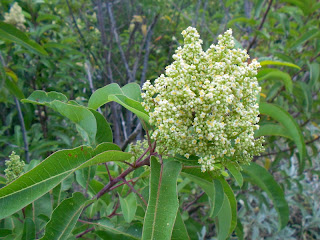 Plants in Bloom - The plants I observe in bloom that are featured on the Fish Canyon Trail Plant Guide include buckwheat, bush monkeyflower, sunflower, golden yarrow, mustard, tree tobacco, Spanish broom (not much left), phacelia, Botta’s clarkia (one occurrence, indeed farewell to spring), milkweed, everlasting, and matilija poppy. Other plants in bloom include laurel sumac (pictured above), toyon, thistle, cliff aster, California aster, lanceleaf and canyon dudleya, scarlet larkspur, creek monkeyflower, deerweed, white sage, honeysuckle, wishbone bush, and blackberry. I give scarlet larkspur the award for being the dominate flower for the day.