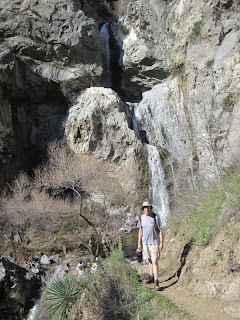 I have had an unusual eagerness in hitting the trial in Fish Canyon today. I’ve been on this trial many times before, but this time is different. On Tuesday, January 25, voters in Azusa made a decision that will forever and inextricable change the face of Fish Canyon. In a 2-1 margin of victory, Azusans voted to uphold a July 17, 2010 city council decision which approved a new mining plan for Vulcan Materials, which owns 270 acres at the mouth of Fish Canyon.

The yearlong battle over mining in Fish Canyon has caused me to reflect on my own experiences with Fish Canyon and Van Tassel Ridge dating back to February 1997. Two years earlier year I had purchased my first copy of John Robinson’s Trails of the Angeles and was excited to see a trail description for Fish Canyon Falls. Unfortunately the mining operation in the mouth of the canyon restricted access. On February 24, 1997, me, my 12-year-old son, Micah, and his friend, Ricky launched out on our first adventure to Fish Canyon taking advantage of an offer by the mining company, CalMat, to providing free shuttle service through the quarry. That outing was marred by a CalMat employee who horribly berated and mistreated us for inadvertently parking in the wrong place. I’ll spare you the details, but his shameful treatment of us was not a very good public relations move and put a very nasty face on the mining company. 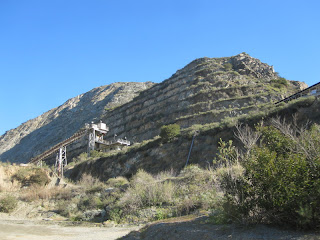 Fast forward to 1999, CalMat was purchased by Vulcan Materials. And it was that year that the City of Duarte built the infamous access trail up and over Van Tassel Ridge. I hiked to Fish Canyon Falls once in 2000 and once in 2004, but it was 2005 when Vulcan stepped up in providing greater access. Starting on April 23, 2005, Jasen Talley, Azusa Rock general foreman, initiated shuttle service through the quarry for four consecutive Saturdays. I had not heard about it until I showed up at the trailhead about 7:00 on Saturday morning (4/23) hoping to find a way through the quarry. When I arrived, there was a big white van parked on the road next to the trailhead. The van door stood open and a tall gentleman stood next to the van postured to receive passengers. Hmmm, what’s this about? Upon inquiry, I learned that Vulcan was providing free shuttle access that day. Cool! What a pleasant surprise! Unlike my previous experience, the face of the new company was kinder and with a touch of southern hospitality.

Over the next several years, Vulcan provided four consecutive access days in April and May, which became an annual hike for me. In the past several years, Vulcan increased the access days to be scattered throughout the year. I wondered about Vulcan’s motives...was it a PR move to gain public support for their mining plan, or was it an altruistic desire to be good neighbors? Or maybe a little of both? Regardless of the motive, I greatly appreciated the access days, as did the public, showing up by the hundreds on each day. And Jasen Talley and his team always have been gracious hosts, putting a kind face on a big company. 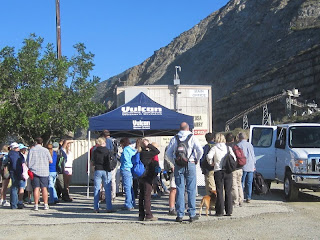 In early 2010, Vulcan brought its new mining proposal to the City of Azusa for approval. It was a full year of review by the planning commission, city council, public hearings, and passionate debate. My initial feelings about the plan were skepticism and an inclination to be opposed to it. But after many hours of investigation, I concluded with the four out of five city council members that the plan was worthy of approval, as did two out of three voters in the Azusa special election last week. And over the past year and particularly over the past month, I found myself genuinely liking the various Vulcan personnel I have observed and gotten to know. My sense is that Vulcan realizes that good business isn’t about making money. It’s about serving people and meeting needs. And when that is done well, it’s profitable.

So it is with an eagerness that I show up on this Saturday to hike Fish Canyon. As I drive into the Vulcan parking lot, I am a surprised to see a gazillion cars and a sizable crowd at the sign-in table. I sign in, jump in a van and off we go. As we drive through the quarry, I look at the 40-foot Mayan benches and visualize them being replaced by 12-inch micro-benches as part of the new reclamation plan. 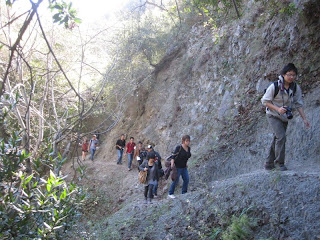 9:22 a.m. - Begin hike. Chilly air greets me. The creek rushes briskly. The grasses are green and the deciduous trees are leafless. Hardly anything in bloom. My pace is slow as I soak in the beauty of the canyon and stop frequently to snap pictures. Windows of solitude are interspersed with parties of hikers coming and going. Recent rains have brought down debris on portions of the trail. It’s fun to run into friends and hikers I’ve met previously. The trail snakes though patches of cool shade and warm sun. The pleasant aromas of nature surround me. I pull out my pruners and trim back some intruding branches along the way. Red toyon berries add a splash of color. Leafless poison oak branches hide the identity of this toxic plant. The rich chaparral plants on the canyon walls look like they have enjoyed our winter rains.

10:34 - Take a side jaunt to Darlin’ Donna Falls. It is flowing nicely. I climb the steep bank on the left to get a view of its upper cascades. Continue on. There is a clustering of hikers at the main stream crossing where one by one they negotiate the rushing creek. I saunter along the east bank now as the trail climbs the canyon wall. At times it feels like the 210 freeway at rush hour as streams of hikers trod the narrow path. I do more trimming en route. 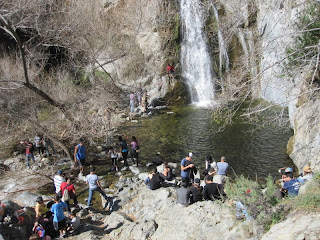 11:09 - Falls come into view. Lots of water and people. I trim off the smaller branches of a tree-like laurel sumac shrub that has fallen across the trail.

11:20 - Fish Canyon Falls. The roar of the 80-foot, three-tier waterfall and the happy sounds of voices echo off the steep rock walls. I count about 60 people. The scene is alive. I linger a while and enjoy watching people enjoy this wonderful place.

12:00 - Leave falls. Continue to trim plants. The weather is perfect. I put on my work gloves and remove a pile of rocks from the trail. Enjoying some nice spans of solitude as the crowds are thinning. Taking lots of pics with different lighting now. Loving the hike. Pondering what I’ll write in the blog. 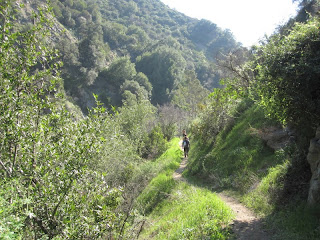 1:37 - Arrive back at the bridge. Soon jump in a van. Not many cars left at the parking area. Sign out at 1:45. Eric from Vulcan reports that there were 457 hikers today. I think that may be pushing a record. What a thoroughly enjoyable outing.

Epilog - I am excited about the new easy-access trail that will be built through the quarry as part of the new mining plan. Hikers will be able to enjoy a nice 5-mile hike 24/7/365. No more shuttles and crowds and time constraints (See Fish Canyon Falls - A New Era - June 21, 2014 Grand Opening ). But I think I’ll miss these access days. There is something special about a shared experience, about being with hundreds of others and partaking of nature’s treasure together. Ah, but I guess there will always be Icehouse Canyon and Mt. Baldy! 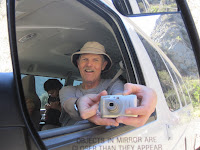